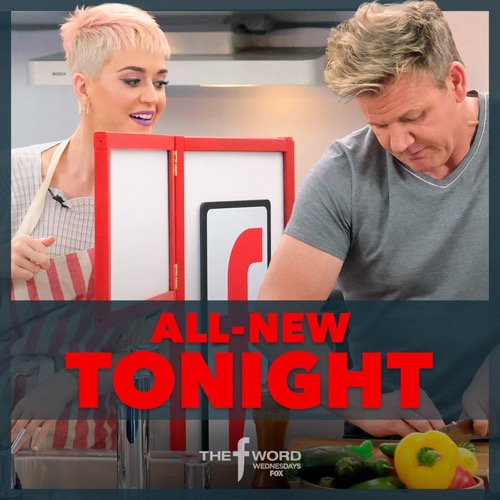 The F Word begins with Chef Ramsay welcoming viewers to The F Word restaurant which is the hottest restaurant in the country right now. Two amateur teams compete against each other live in the restaurant, the diners decide if they are willing to pay for their dish, which ever team has the most votes wins; and on the season finale, Chef Gordon Ramsay will pick two of the winning teams to compete for $100,000.

Tonight’s teams are The Meatheads versus Wine & Stein, and tonight’s dinner is Chicken Parm with spaghetti. Gordon Ramsay hops into bed with Katy Perry, while saying he came to teach her how to cook. Kal Penn and Max Greenfield are live in the restaurant as well as Chef Ramsay will compete in fileting halibut.

The Meatheads are ex-football players who formed a bond over cooking. Andy is their meat man, Greg is the sauce man, Jon is the vegetables man while John “Catfish” makes things like guacamole. He wonders if these friends who know how to work things out on the field can be clutched in the F Word kitchen?

Andy is the team captain, plating. Catfish and Greg will be handling meat while Jon does sides and sauces. They are all wearing sweatbands and he jokes they need to keep the sweat out of the food. Whitney Webster is their sous chef.
The Wine and Stein is a team of siblings who grow up with the coastal lifestyle; Tracy, Arik, Brandt and Brittany. Cooking is in their blood, their mother taught them recipes from when they were little. Chef Ramsay says they definitely don’t lack confidence but will that help them defeat their opponents?

Tracy is the team captain and says they all are capable of doing each task, not putting anyone in particular station. They are introduced to their sous chef, Ben Kronick and Chef Ramsay tells them to stop staring at him and get going. Viewers are then brought to Chef Gordon Ramsay’s kitchen when he shows us how to make the dish they are creating in The F Word kitchen tonight.

Gordon Ramsay welcomes us back The Meatheads served 16 dishes and Wine and Stein served 22 dishes. He interrupts Andy and brings his team up showing him how to plate properly saying less is more, making it less sloppy. He reminds them to work together as a team and keep eyes wide open.

Mega-popstar, Katy Perry did 96 hours of straight live-streaming on Youtube promoting her new album “Witness”. She invited him to give her a cooking lesson for the whole world to see. He arrives with flowers, and she gives him a tour of her home away from home. She brings him up to her bedroom, where he jokes she didn’t make her bed. She asks if they can go to sleep and he says he came there to teach her how to cook.

They sit in the meditation room where he says the monk kept asking him what his thoughts were and he said they were always naughty. As Katy chastises him for being a naughty boy, he says don’t start preaching me and she says she is starving and they need to do the F Word….. FOOD

He puts a separation board in her kitchen and says she is going to cook but she cannot follow his actions, she must only do what he says. Back in the restaurant, Gordon Ramsay visits with the Wine and Stein team, he asks about their bottle of champagne sitting in an ice bucket. He tells them to focus on their food and not the champagne and they should not act over confident.

Chef Ramsay calls the teams over to reveal some of the feedback. The Meatheads learn their feedback has been strong, they have served 22 dishes but only 10 would be happy to pay; he tells them to tighten up and focus on the seasoning. Wine and Stein served 26 dishes but only 14 are happy to pay. The competition is neck and neck, he says its not a race but they need to stay on time; 50 is the magic number.

Chef Gordon Ramsay sits with Kal Penn at the bar, he admits he loves cooking. He says the dish was good. He talks about his time on Celebrity MasterChef and how he has perfected the taco recipe, now attempting to make a vegan version of it. Gordon congratulates him on his new show on FOX called “Superhuman”.

Charity Johnson is the bartender, Gordon has a 5-question quiz for Kal and if he gets it right, Gordon has to take a shot of bourbon; if he gets it wrong, he has to take a shot. The first 3 shots, Ramsay takes the shot, when he gets the 4th question right Ramsay throws the shot on the floor. Kal gets the last one wrong and drinks his shot. When he cheers Ramsay, he reveals his shots were only green tea. Kal bursts out laughing.

In Katy Perry’s kitchen, Gordon Ramsay is on one side of the partition making the dish and Katy is on the other. She is only allowed to follow his verbal directions. She jokes when he is 10 steps ahead of her saying he has 16 Michelin stars and she has zero, when her stove begins beeping, she runs away.

Gordon comes into her kitchen and turns her stove down; she talks about how easily you can burn things in the kitchen, Gordon gets sarcastic saying he loves how she is the one who can tell her its easy to burn things in the kitchen. They present their plates and hers looks pretty good. He tastes her food and she promises him there is more salt and pepper in her album then there is in those balls. She thoroughly enjoys his dish.

In The F Word, Gordon Ramsay congratulates Lucas Lam and all his friends for graduating from college. They are given superhuman cocktails, told to enjoy tonight as tomorrow they work. Lucas wants to be a Lobbyist and Gordon asks him why? He says he loves the government and they make a lot of money. As Gordon leaves the table, he is shown a raw dish served from Wine and Stein.

Gordon brings the dish to their kitchen, he shows them it is completely raw but shares they are way in front and there is no rush. He says he prefers them to slice one and waste it than send it out under cooked. He reminds them to focus and orders them to refire that table.

Gordon joins Max Greenfield and his daughter, Lilly at their table. Lilly says her dad’s food is 100 out of 10. They celebrate that Lilly just finished second grade, and she tells him she would like to compete on MasterChef Junior. Max says he was for wine and Stein but Lilly says it was a little bit too lemony, they suggest she tells the kitchen herself. Gordon decides to give Max a little taste test.

He isn’t allowed to see the 3 items, Lilly puts a mask over her dad’s eyes. The items are pop rocks, horseradish and oysters. Max opens his mouth wide, he is given the pop rocks and he guesses right.

Next Gordon tells him to open his mouth as the helicopter is coming, he opens wide and he hides his face behind his daughter who tells him not to throw up on her; but he guesses right that it was horseradish.

Last one, he says it is oyster as Lilly backed away. Gordon says he did a great job but Lilly protests it wasn’t as he was about to throw up on her! He gives Lilly a MasterChef Jr apron telling her to take a picture the next time she is cooking with daddy.

The Meatheads served 42 and wine and Stein served 44; now its time for Chef Gordon Ramsay to taste both dishes. He tells Andy the dish has picked it up, the flavoring improved and cooked well. He gives him a cloth to clear the sweat off his face. Tracy isn’t sure who made the dish, he says it is much better, a bit more seasoning though. He jokes that Andy’s hands are bigger than his size 15 feet.

Gordon now is going to attempt to finally make the Guinness Book of World Records for the fast time in fileting a fish. Jenna Fabich arrives from Alaska, they are to make 15 filets in under 2 minutes. Two judges are there for Guinness to record the event. Gordon finishes first; Jenna only had 13 good portions and is disqualified but Gordon had 15 good portions and his time was 1 minute 5 seconds and he finally achieves his dream, saying he’s waited 15 years for this moment.

Later, he greets Jenna at the restaurant, she was only 8 seconds behind him and she agrees to come back and beat him, saying she is only 19. He tells her to keep up her good work as he knows MasterChefs who can’t filet like her. He announces the kitchen is closed.

The dining room have voted; Gordon says they both did really well but there can only be one winning team. One team only had 17 out of 50 diners who would pay while the other had 21 out of 50; the winning team tonight is The Meatheads!!!