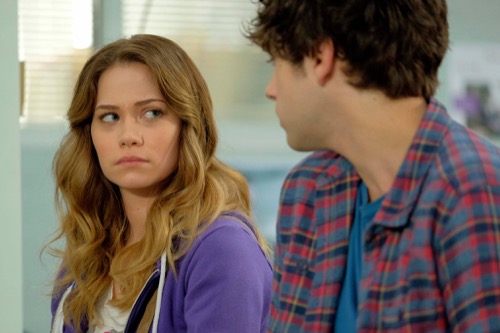 Tonight on Freeform their hit drama The Fosters returns with an all new Wednesday, February 28, season 4 episode 15 called, “Sex Ed,” and we have your weekly The Fosters recap below. On tonight’s episode as per the Freeform synopsis, “Jesus ( Noah Centineo) grows suspicious of Brandon (David Lambert) and Emma’s relationship; Jude uses a dating app for adults to learn about LGBT sex after discovering the topic isn’t covered in sex ed; and Callie’s (Maia Mitchell) senior project is criticized by the school’s administration.”

Callie is displaying her art work, a small room plastered with images and clippings. The inside look at her life in foster care and juvie has all the students looking and asking questions.

Jesus’ girlfriend Anna tells Brandon at the hospital, where she is waiting to be seen, that she suffers from anxiety and depression. She went on St. John’s Wort, and didn’t know that it would affect her birth control. She wants to know what Brandon would do in her shoes. How would Jesus feel if she got an abortion before telling him? It is going to be awhile before he is well.

Jude is in sex ed class. Callie is taking questions. She explains solitary confinement. She shares that she was abused. One student thinks she is brave for sharing what happened to her.

Jude’s friend asks him if he thinks anyone in their grade is having sex. She asks him if he has had sex. He plans on it. He is nervous. She tells him to try a practice hook-up.

At family dinner, Jesus is asking Brandon if he has seen Anna. Stef talks to the girls about taking self-defense. Jude talks about gay sex after sharing he had sex-ed today. Lena takes a call from a co-worker. Its is about Callie’s project. She needs it removed from campus asap.

Mike, AJ and the girls have dinner. He wants to know when they are moving in. He was tipped off by Mariana.

Mariana goes out to the backyard. Stef is going to teach her some basic self-defense. Mariana shows up in heels. Stef tells her to practice screaming. She lets out a screech. She takes a text. Stef is irritated she isn’t taking it serious.

Jude is reading chat forums on gay sex for the first time. Words like “awkward” and “scary” jump out at him.

Lena visits Callie in her room. She has to talk to her about her art project. Its open house and the school needs to do all they can to get perspective students in the door. Callie takes it well.

Jude is talking to other guys on chat, trying to find his practice run. He tells one guy he is 18.

Mike is getting cold feet about the moving situation. Because of her felony, Mariana and Jesus’ mom can’t live with them.

Stef talks to Monty and a new teacher about gay sex-ed. They don’t take the idea well and point out that she is currently on administrative leave.

Brandon visits a classroom for autistic children. He offers to help her, she is working with autistic kids. He puts away some the instruments. He tries to talk to one boy who gets very upset. The therapist tells him not to touch a child with autism.

AJ tells Callie that Mike wants to adopt him. He is a little hesitant.

Jesus and Anna are cuddling in his room. He wants help with some physical therapy. Anna turns him down. His family is home. Why doesn’t she make him a sandwich.

Jude responds to a message from the chat site. He makes plans to meet up.

AJ visits his brother. He thanks him for all of the reading material. Things are going well.

Anna tells Brandon that Jesus wants to have sex. She told him he wasn’t well enough. Brandon tells her that if she needs to talk to someone, he can talk to her.

Mariana is in the backyard. Stef jumps out at her. She screams. That was the scream Stef wanted to hear. Mariana runs into the house.

Jude is at a motel. He knocks at a door. The man yells – its open. The guy comes out in a towel.

Stef apologizes to Mariana for scaring her. Mariana was so scared with Nick she didn’t scream. She froze up. Stef explains that fear is a good thing. Mariana screams in her face and then laughs. Stef calls her a punk.

Lena and Callie pack up the car with her project. Monty arrives. She wants to know if she is behind the open house boycott. Callie explains that it is some of the seniors. Callie has an idea.

Lena and Stef ask Jude who downloaded the gay app, Pump. He pretends not to know. They ask him for his phone. He explains what happened. He told the guy he was 18 and the man didn’t believe him so he told him to get out. He was scared. Lena understands, gay kids aren’t taught about sex. Stef is upset that he put himself in such a bad situation. He is 14, he doesn’t need to have sex. They all hug.

Lena puts up flyers around the school for an LGBT group. Brandon goes back to the classroom. He wants to try again. He knocks over a bunch of music stands. One student laughs.

Callie set up her project off campus, but within view of the school. Monty is mad while Lena supports Callie. It was the only way Callie could get the seniors to back down.

Brandon thinks the universe is telling him that this isn’t his thing. The therapist brings him over to a student and his mom. Brandon made him laugh, he never laughs. Brandon should feel good.

AJ tells Callie about his brother and his plans to get out. He wants them to move in together.

One of the mother’s at the open house is an art professor at San Diego State. She tells Callie she is talented and should apply.

Anna and Jesus are playing the piano. Brandon comes home. He tries to help them. Jesus gets upset. He tells them to get a room. Anna leaves. Jesus falls down and cries. Stef holds him. Mariana goes to Brandon. Is it true? Is he sleeping with her? Mariana suspects Anna is pregnant. Brandon tells her not anymore.

Lena and Callie come home. Robert is there. They have to go to trial, they won’t take the settlement.