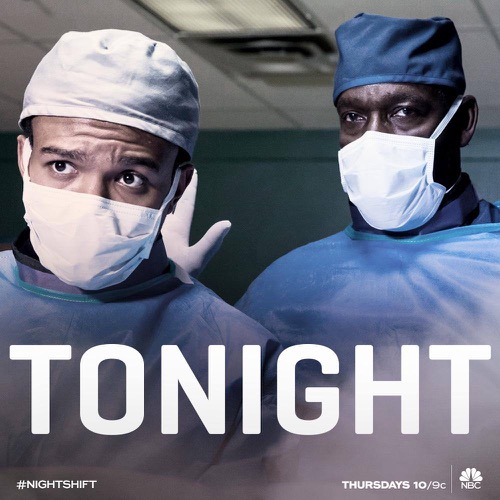 Tonight on NBC their new drama The Night Shift airs with an all new Thursday, June 29 season 4 episode 2 called “Off the Rails,” and we have your The Night Shift recap below. On tonight’s Night Shift episode as per the NBC synopsis, “An amusement-park disaster results in mass-casualty victims flooding the hospital. Also, TC continues his quest to reunite with Syd; Drew reevaluates his priorities as a new father; Jordan tries to get Paul back on staff; Scott pursues a more active role in the hospital..”

Unfortunately, Drew had had little choice with Sophia. He knew that he couldn’t bring her into the cart or risking going down with her still hanging on however Sophia hadn’t wanted to let go of the cart on her own volition and so Drew pried her hands off. Though Sophia survived the fall. She had fallen where she was supposed to and the firemen quickly came to her aide. So it was just Sophia’s friend Abby that remained in danger and the doctors were told to treat her without informing her mother about her abortion down in Mexico.

But Abby sustained injuries to her abdomen and was in tremendous pain of because of it. So her mother didn’t want to leave her side. She instead wanted to be by her daughter and hear it from the doctors themselves about whether or not her daughter was going to be ok though the staff were eventually able to pry her away in order to get Abby into surgery and it turned out that there was a complication. The doctors had come across a fetus indicating that Abby was still pregnant and that her surgery in Juarez had been botched.

So no one initially knew what procedure had been done on the young woman or if that could’ve harmed the fetus, but it was Drew and Scott’s job to tell Abby about their recent findings and she was a little confused about what she was feeling. Abby thought her baby was beautiful and that now she should keep it. Yet, she was also struggling with the idea of telling her mom about the baby because her mom had to give up on college to raise her and she felt like she was going to tell her mom that she had committed the same mistake.

Except Drew didn’t think that Abby’s mom would think that and he had done his best to assure her that things will be alright. However, Abby’s friend’s Sophia had suffered a seizure and had needed to get several tests. So Paul was tricked into coming back to work because Sophia had grown attached to him and didn’t want to take the tests without him by her side yet he still didn’t like it that his father was his boss and so Jordan had some work on her hands. She had to find a way to convince Paul to accept his father as his boss or the deal with Julian was off.

Julian apparently wanted more than just his son working for him. He also wanted Paul to do as he says and not fight with him about it, for once. Though both Jordan and Scott for that matter have tried to tell Julian that his plan wasn’t going to work with Paul because he could be Paul’s boss or his father however he couldn’t be both. So Scott let both men work on Sophia’s case. Sophia had mixed her antidepressants with cocaine and that was causing most of her seizures. And so Sophia needed to go into surgery and she wasn’t the only one.

Abby later began experiencing stomach pains and her mother explicitly asked that Abby be saved no matter what. Which in this case meant saving the young woman even at the cost of her unborn child. But those were Abby’s guardian’s wishes and Drew knew that the mother needed a chance to make things right with Abby after spending most of her childhood serving overseas. So he did his best and he actually saved the baby’s life though Abby realized in the end that she wanted to put the baby up for adoption.

Abby told her mother that she was too young to be a mom and that she could never do as good of a job as she did. So Abby’s mom, Dana, decided to ask for someone else to fill in for her while she stays with her daughter for the rest of Abby’s pregnancy and so Abby was finally going to get to have her mom by her when she needs it. And she wasn’t the only one that was going to get a parent. Sophia’s parents were also contacted and threatened with child services if they didn’t start paying attention to their daughter rather than throw a credit card at her.

So Drew and Paul brought the girls closer to their families and Paul even stood up to his father. He told him that he was his son out of the hospital and a member of staff at the hospital. However, Julian was told that he couldn’t pay for Paul’s student loans or rent which had been a condition for Paul to stay on at the hospital. And so Scott did get what he wanted in the end because he was chosen as an intermediary between Julian and the rest of the staff so that Julian didn’t have to risk injuring his relationship with his son.

Though with everyone slowly returning to the hospital, they thought that it would be a matter of time before Topher came back and unfortunately that was never going to happen. Topher had gotten into a car accident with his daughter and they weren’t any survivors. So Jordan broke the news to the staff and she got a message to TC afterwards to tell him about what happened however TC had already gone ahead and committed himself to an additional month in Syria. He had found Sydney and had gotten her on the next helicopter out of there only he wanted to stay on.

TC thought that there were still others out there that he could help and so he chose to stay on though now there was no way he could rush back to attend Topher’s funeral or be there for his friends.

And while the hospital had lost a doctor, they had also gained a resident when they found out that Cain used to run an Emergency Room down in Mexico and would be a good fit for their hospital.