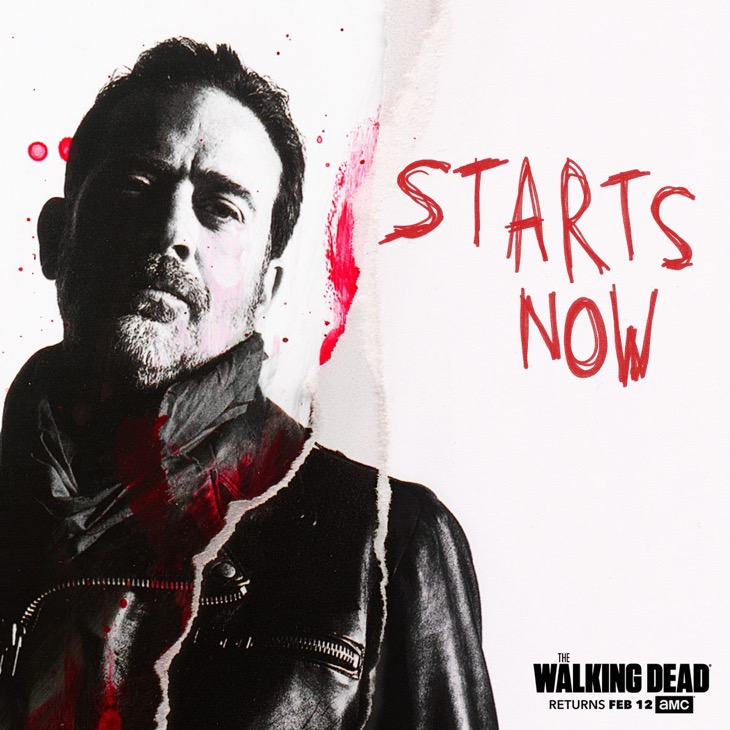 Tonight on AMC our favorite show The Walking Dead airs its season 7 winter premiere with an all-new Sunday,  February 12, 2017, episode and we have your The Walking Dead recap below.  On tonight’s The Walking Dead Season 7 episode 9 called, “Rock in the Road,” as per the AMC synopsis, “Rick (Andrew Lincoln) and the group are led to a new community, where they are introduced to its inhabitants and ruler; and a familiar face resurfaces.”

It’s night in Alexandria. Gabriel is keeping watch as he reads from the bible. He notices something in the distance and looks around. He goes into the food pantry. He begins pushing all of the food into baskets. He reads the log. Starts collecting knives and packing it all in a car trunk. Fills up with gas He takes off by himself.

Rick and the gang try to talk Gregory into taking a stand. He doesn’t want to. He wants to keep living the way they are. He doesn’t believe he has enough fighters to go up against the Saviors. Michonne and Daryl try to change his mind. He doesn’t care what they do. He wants them to leave and not be seen.

They head outside. A group awaits them. They don’t care what Gregory says – they want to fight. Rick says they need more hands, another group. Jesus wants to introduce them to King Ezekiel. They all take a ride to the Kingdom. They greeted by Richard and one other on a horse. He wants to know who Rick and everyone is. Jesus says they are like-minded and he wants them to meet Ezekiel. They hand over their guns and follow Richard in.

They enter the Kingdom to see gardens, people, organization and plenty of people. Rick smiles. They see Morgan. They all hug. Richard tells them the king is ready to see him. Before they go in, Morgan tells Daryl and Rick about Carol. How she wants to leave alone and be left alone. Morgan tells them how he killed for Carol – he had to.

The gang comes in to meet Ezekiel. They are all in shock about the tiger, they stand back, hesitant. He asks them why they are here. Rick speaks, they are there because they need their help with the Saviors. Ezekiel is mad that Jesus told Rick and the gang that they have a deal with the Saviors, his people don’t even know. Michonne shares that several of their people were killed by the Saviors. Rosita lists the all off – Glenn, Abraham…Morgan is surprised and sad. Rick explains that they don’t have enough fighters or weapons. Richard says that they (the Kingdom) have both. He asks Ezekiel to set things right – to fight. The king asks Morgan what he thinks.

Morgan thinks too many people will die. There has to be another way. Maybe they could capture Negan. The king wants to think on it. Rick tells him that his mother used to tell him a story about a long road to a king, a bumpy dangerous road that had a large rock in it that injured people. A little girl wanted to know why the rock in the road was still there.

She dug at it, trying to rip it out while her hands bled. She looked closer and it was gold. The king had put it there for that someone who would try and make a change for the greater good, a reward. The king listens intently as Rick tells his story. He asks them to stay the night and to eat dinner with the Kingdom – he will have his answer in the morning.

Benjamin, a teenage boy is walking through the woods. He spots Carol, she has a gun aimed right at him. She asks why he didn’t run. He is training. She tells him to head home, it will dark soon. The woods aren’t safe. He tells her that Ezekiel wants to know how she is. He offers her food and water. Ezekiel isn’t going to leave her alone. He cares about people.

Back at the Kingdom, Ezekiel is telling a bedtime story when Benjamin comes in. He tells him he saw Carol. He explains that she was well. Benjamin gives his thoughts on helping Rick and the gang. His dad taught him that when you are asked to be a hero, you be a hero.

Morning comes, the community practices getting into shape, shooting bow and arrow. Ezekiel explains to Rick and the gang that he wants to expand the Kingdom, he doesn’t want to lose his people. He has peace with the Saviors right now. He offers Daryl safety, a silo. The saviors don’t step foot into their walls. Daryl asks him how long he thinks that will last. Rick and the gang make their way out of the Kingdom. Richard wants to go fight with them. He disagrees with the King. Rick tells Daryl he has to stay and talk the King into fighting. Daryl doesn’t want to, but agrees.

The gang head back to Alexandria while listening to the radio Jesus stole from the saviors. They come up to a barricade of cars in the way. Must be the saviors. Michonne keeps watch while the others move the cars. Michonne spots a steel cable with explosives. They find the guts of the explosive in the ground. Rosita disarms it. Negan talks on the radio – Daryl is missing. He wants his men to round them up.

Rick and the gang need to grab the explosives but they also need to get home so that they can be there for when Negan’s men show up. They work quickly to steal the secondary explosives. Carl spots a herd of walkers coming in the distance. They pick up speed. They load the cars, move them. Rick and Michonne use two cars with a steel cable connected to get back to the others.

They slice dozens and dozens of walkers in half, driving the cars yards and yards apart before making it close to the others in a waiting car. They jump out, fighting walkers. They jump into the car and take off. An explosion goes off behind them.

Michonne tells Rick that they are the ones who survive. They can do this, they can fight! The gang make it back to Alexandria just in time. With the gate still open, they see Negan’s men pull up. Rick tells the men that they had more time to give up their offering. They are there for Daryl and they want to search Alexandria. They rip the place apart looking. They notice that there is no food in stock. They need to get ready for their next pick up. They don’t find Daryl. They head out.

Rick asks what happened to the pantry. Arron explains that Gabriel is gone. Rosita calls him a son of a bitch. He stole their stuff and ran. Rick finds his bible in the house. Tara can’t believe he would just leave. Rick wants to know why he left his bible. Rosita says that he doesn’t want to be found. Rick finds a page with a message with the word BOAT.

Aaron packs up to leave but his husband doesn’t want him to go. Aaron can’t turn away. The gang heads out to the area where Aaron and Rick went on the boat. They see tracks. They follow them, but are quickly surrounded by 60-80 people. They have them at gun point. Rick smiles – this is the man power they need.