The Young and the Restless Spoilers: 3 New Genoa City Couples – Which One Do You Like The Best? 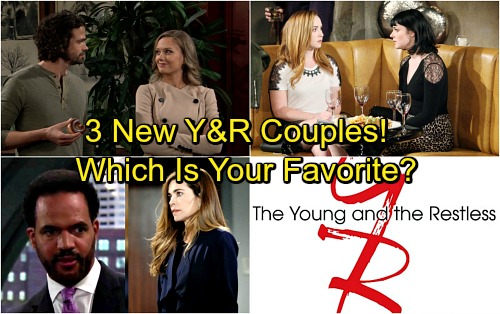 The Young and the Restless spoilers tease that new couple speculation is blowing in the Autumn wind at Y&R. There are plenty of potential options, but which couple would be best among the three that are cited below?

Vickie has been pinning for Billy since he was played by Billy Miller. Today, Billy-boy is embodied by Jason Thompson. Vickie seems likely to realize the rebound if Philly folds. But what if the script doesn’t play as straight as it projects?

Neil won’t ever have a love like Dru (Victoria Rowell). Short of an announced legal detente with TPTB, Rowell is unlikely to return to Y&R.

Miss Newman and Mr. Winters are available and age-appropriate. They are also longtime friends who recently entered a bridge loan agreement that will keep them close for awhile. Plus, there are also no personal warning signs that indicate a mismatch.

Yes, Neil has teamed with Jack (Peter Bergman) to form the Abbott-Winters Foundation. But that should not count as a strike against him.

Raising children involves the presence of consistent role models. Considering that he is a father and a grandfather, Hilary (Mishael Morgan) is miles behind him, his security at the Hamilton-Winters Group and that he’s seemingly beat the bottle, Neil seems like a top-flight candidate for Vickie to form a relationship with.

It doesn’t seem like Y&R was ready to go all-in with this storyline. Possibly the transfer of writing power from Sally Sussman to Mal Young created a blip, rather than an end to this potential couple’s pairing?

Those who tag themselves as open-minded believe this pairing should happen. Traditionalists think differently and are often chided for their life experiences.

Possibly there is a way to respect everyone while Mariah explores herself? Maybe, that’s already happening.

Scott rubs Abby the wrong way, which indicates sexual chemistry. Hall’s character appears to be fully in love with Sharon (Sharon Case). But Case’s character has a history of being let down by her romantic partners.

It appears that Scott’s Hashtag investigation into the trafficking storyline will lead to him uncovering Zack (Ryan Ashton) as the ring’s leader. Abby will need comforting at that point. Shott may be finished if Scott and his heretofore nemesis cross the line and Sharon finds out.

It would seem unlikely that Y&R would position Abby and Scott together and then not at least explore their romantic potential. Abby won’t be with Zack much longer. Scott doesn’t have an age-old connection to Sharon, as they’ve only been together for months.

Yes, Scabby sounds icky. But it could work.