BY Olivia Marie on September 22, 2017 | Comments: one comment
Related : Soap Opera, Spoiler, Television, The Young and the Restless 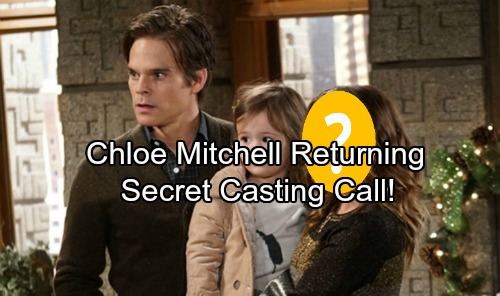 The Young and the Restless (Y&R) spoilers reveal the comings and goings for the week of September 25. The newest scoop suggests that Chloe could be making her way back on the soap opera, but will Elizabeth Hendrickson return? Find out the latest casting news below.

Beth Maitland, the actress that plays Traci Abbott, will return on October 9. The word on social media is she will return to help her siblings with Graham’s (Max Shippee) pull on their mother, Dina Mergeron (Marla Adams). When Y&R announces Graham identity, Dina will probably need to lean on her daughter, Traci for comfort.

The biggest casting scoop recently is that Chloe Mitchell will return to Genoa City. CDL’s exclusive inside sources reveal that CBS wants to bring Chloe back, but Elizabeth Hendrickson isn’t sure if she wants to return. CBS put out a secret casting call trying to find the perfect Chloe to bring her back for February sweeps!

Tamara Clatterbuck returns as Alice Johnson this week. Marah Copeland (Camryn Grimes) and Tessa Porter (Cait Fairbanks) will kidnap her and demand to know where they are keeping her sister. It could put both women in the line of danger.

Jason Thompson’s wife, Paloma Jonas, had a healthy baby girl on September 20. The actor revealed a few weeks ago that the infant’s birth wouldn’t impact his alter ego, Billy Abbott. Y&R fans shouldn’t expect any lapse in Billy scenes in the next few weeks.

Greg Rikaart will continue his arc as Kevin Fisher. He will appear for another week (at least) as he helps Victor Newman (Eric Braeden) reclaim (steal) his money back from Nick Newman’s (Joshua Morrow) bank account. The Young and the Restless viewers are scared that The Moustache will throw Kevin under the bus for the money grab if law enforcement finds out about the hack into Nick’s account.

Y&R alum Michael Muhney tweeted that he landed an appearance on ABC’s The Good Doctor. He asked his fans and followers to set their DVR’s for October 16. Let’s hope he gets called back for more episodes in the future! Stick with CDL for more The Young and the Restless (Y&R) spoilers, news, and casting updates!