The Young and the Restless Spoilers: Colin’s Help Counts With New Grandson – Cane and Juliet Make It As New GC Couple 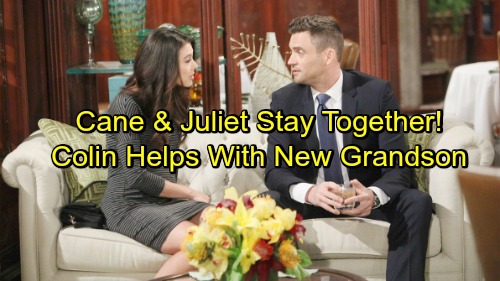 The Young and the Restless spoilers tease that Colin’s (Tristan Rogers) return to Genoa City will serve to help both Cane (Daniel Goddard), Juliet (Laur Allen) and their soon-to-be-born baby. This emerging couple will benefit from Colin’s presence, as both people are lacking family support.

Cane’s immediate family isn’t gone, but isn’t able to help him in this current situation. For the moment, that’s understandable. Lily (Christel Khalil), his wife, has been betrayed. So, no one would expect her to be part of team Jane.

As for the twins, they were SORAS’d, but are still kids. Charlie (Noah Alexander Gerry) and Mattie (Lexie Stevenson) are doing the best they can. They still love their dad. While they’re hurt, they’ll come around in time.

Juliet’s family has been unseen to-date. Whether Allen’s character’s backstory will be expanded in the future is unknown. So, the boy she’s carrying, Cane and now, Colin, represent the depth of her personal ties in Genoa City.

Colin’s checkered past might not make him an ideal nurturing source. But he’s fiercely loyal to Cane, well-intentioned and doesn’t have Jill (Jess Walton) lambasting him about various things, yet. She’s out of town at some sort of find-yourself conference, but is expected to return to town prior to the baby’s birth.

Cane put himself in a terrible position through his many misguided actions. He alienated many of his previously trusted human touchstones as a result. That’s left Juliet as his only sounding board. She’s in love with Cane, but can’t be expected to answer every life question considering her age, which appears to be ten years younger than his own, and her current condition.

Juliet must think first about her health and that of the baby. She needs to rely on Cane to help her, as any expectant mother should expect the father of her child to be strong. This common dynamic affords Colin an opportunity to be uniquely helpful to his son right now.

Cane has had a strained relationship with his dad through the years. That resulted, in part, because of Colin’s choice of profession and his personal proclivities. However, the instant embrace Cane offered to Colin upon his return revealed just how much this son values and needs his father.

As Cane works toward the day when his second son arrives, he’ll hopefully receive the type of loving advice his father is capable of giving. That, in turn, will allow Juliet and the baby to be fully supported.