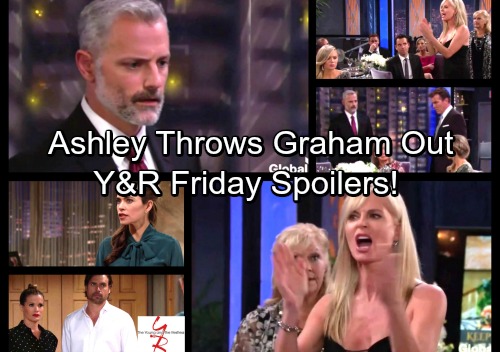 The Young and the Restless (Y&R) spoilers for Friday, October 13, tease that we’ll see the rest of Ashley’s (Eileen Davidson) chaotic party. Friday the 13th will certainly prove unlucky for Ash. She’ll struggle to cope with the trouble that’s been stirred up. Thursday brought Ashley’s paternity secret out in the open, so she’ll have a thing or two to say to Graham (Max Shippee).

On Friday, The Young and the Restless spoilers state that Ashley will clap and shout. She’ll sarcastically suggest that everybody should give it up for Graham. Ashley will contend that he really stole the show with his vengeful display. Graham will grab Dina’s (Marla Adams) arm and insist that they should leave. He’ll think they need to get away from the selfish Abbott clan right now.

Dina will refuse to go anywhere with the man who deceived her. Graham targeted Dina and her family, so why should she leave with him? It looks like he’s on his own now. Just in case Graham tries to delay his exit, Ashley will offer a stern warning. She’ll growl that Graham should get out now or she’ll have security drag him out. 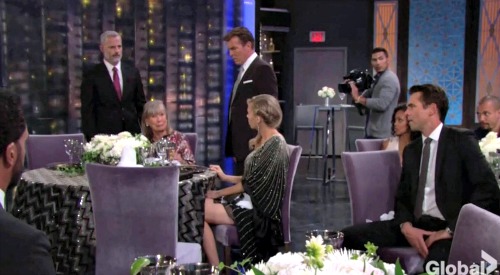 You can bet that Ashley means it! She’ll clearly be riled over Graham’s outburst. Once Graham stomps off, Ashley will be left to face a stunned room. Abby (Melissa Ordway) will obviously want some answers. Traci (Beth Maitland) and Billy (Jason Thompson) will have questions as well. Dina will try to shield Ashley from more heartache, but the damage is done.

Unfortunately, this Y&R secret should spread quickly. Hilary (Mishael Morgan) is covering this event, so this shocker should be the talk of the town in no time. Since Ashley works for a high-profile company and just accepted a prestigious award, this story could reach far beyond Genoa City. Ash will just have to accept that things can never go back to the way they were.

Meanwhile, Victoria (Amelia Heinle) will hope to figure out what’s going on inside Nick’s (Joshua Morrow) head. He’s decided to donate his entire trust fund to charity, so that’s a major life change. Victoria will wonder why Nick would give all his money away just to spite Victor (Eric Braeden). She’ll yell that it’s certifiable!