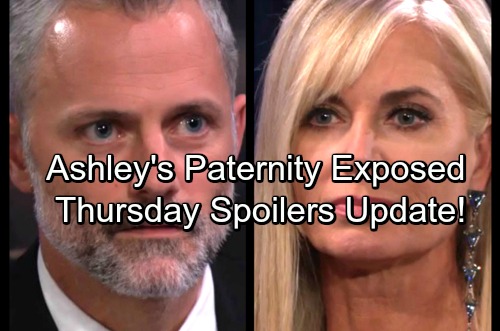 The Young and the Restless (Y&R) spoilers for Thursday, October 12, tease that a long-held secret will finally be revealed. Ashley’s (Eileen Davidson) paternity will be exposed publicly! Before we get to the chaos, Graham (Max Shippee) will speak to Dina (Marla Adams) about her daughter. He’ll note that Ashley’s paternity didn’t really affect her life. Ash still had a loving father in John (Jerry Douglas).

Dina will insist that the paternity news nearly broke Ashley. Graham will be intrigued by how much the revelation affected her. Later, The Young and the Restless spoilers say Ashley’s party will get underway. Jack (Peter Bergman) and Billy (Jason Thompson) will actually manage to keep the peace.

After Traci (Beth Maitland) and Jack get up to praise Ashley, Graham will urge Dina to take her turn. When Dina gets choked up, Ashley will swoop in to give her a break. Graham won’t approve of that decision. He’ll push Ashley to let her mom continue, but a fierce confrontation will ensue instead. Ashley will snarl that Graham has been manipulating Dina.

Y&R spoilers state that Ashley will rant about Graham’s mother, Myrna (Marcia Dodd). She’ll note that he grew up in Genoa City. An enraged Graham will admit that he wanted vengeance. He’ll explain that Brent Davis was his stepfather, but he thought of him as his real dad. Graham will complain that Dina destroyed their family by luring Brent away.

The Young and the Restless spoilers say Dina will be stunned by Graham’s confession. She’ll ask if this is really all about “Ashley’s father, Brent Davis.” A satisfied Graham will raise his glass for a toast to the fake Abbott. He’ll be glad that Dina and her clan are finally going to experience some pain.

While the Abbott family deals with that shocker, Nick (Joshua Morrow) will give the Newmans one of his own. It’ll be another monumental occasion as Nick pulls off the lamest revenge plot of all time. His lackluster strategy involves giving away all the money in his trust fund.

Nick will point out that Victor took all the money from his checking account. He’ll suggest that nothing good came from the Newman wealth, so he’s giving up the rest as well. Victor will warn that Nick just threw away the last bit of his safety net. He’ll be certain that Nick will regret it.

It looks like Nick is heading into dangerous territory. We’ll give you updates as other Y&R details emerge. Stay tuned to the CBS soap and don’t forget to check CDL often for the latest Young and the Restless spoilers, updates and news.