The Young and the Restless Spoilers: Hilary Breaks The Law – Protective Order Needed – Twins Must Be Defended 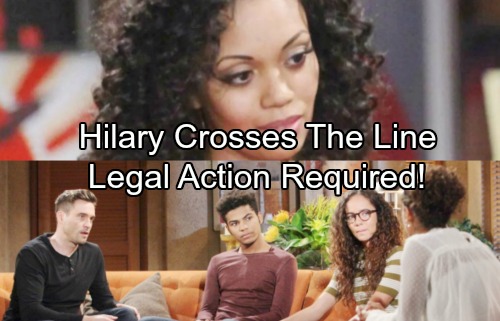 The Young and the Restless spoilers tease that Hilary (Mishael Morgan) may have crossed a legal line when she encouraged Mattie (Lexie Stevenson) to break her parent’s rules. In giving Mattie her smartphone, so she could text Reed (Tristan Lake Leabu), Hilary knowingly urged a minor to betray her family. That wasn’t just morally wrong, it deserves a legal review.

A protective order should be sought that forces Hilary to be no closer than 100 feet from either twin. The Ashby’s are solely responsible for the rules their children live by. Hilary purposely encouraged Mattie to defy her parents

Lily (Christel Khalil) and Cane (Daniel Goddard) will be furious when they learn what Hilary did. Though Mattie is now allowed to see Reed, based on the precondition that they abide by the rules. It’s a point that Hilary shouldn’t be allowed to overlook. 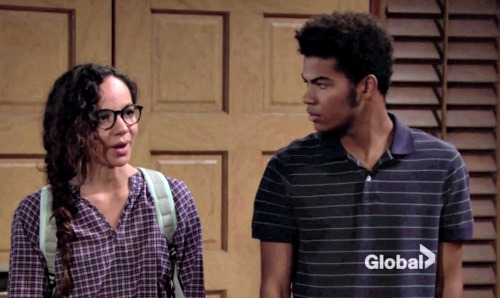 Hilary told Mattie in the recent past and again this week that she won’t tell her parents about seeing, or attempting to contact Reed. Honest adults never encourage the child of any parent to withhold any information, or to purposely keep cards back.

No adult should feel he or she can neutralize, or negate whatever rules parents have established for their child, or children. As long as no laws are being broken and the children are safe, this issue of parental control isn’t up for public debate in the real, or soapy world.

No moral compass seems to exist in Hilary’s mind. She’s been attacking Lily’s family since first arriving in Genoa City earlier this decade. So Hilary’s suggestion to Mattie, that she understood where she was coming from regarding a boyfriend, was purely a ruse to establish trust.

The GC Buzz owner should be legally restrained from having contact with either Ashby child. Hilary is a clear and present danger to the twin’s well-being.

As Y&R viewers know, Hilary isn’t a mother. Devon’s (Bryton James) painful existence as one-half of Hevon would have been far more prickly if he had fathered her first-born. Because she hasn’t given birth, Hilary lacks the nurturing life experience that Lily embodies. That’s another area of jealousy that pits the former Mrs. Hamilton against the soon-to-be former Mrs. Ashby.

Of course, Hilary came to own GC Buzz through her divorce settlement. This singular request in that legal accord enabled her ongoing thirst for gossip and need to apply misery to Genoa City’s residents, among others.

Now, without a man chasing her, Hilary has plenty of time on her hands. That incremental space has allowed creative morality to take hold again.

Mattie needs to tell both of her parents that Hilary has been advising her behind their backs. Lily and Cane’s vulnerable state has been exploited thus far. Legal action should be pursued to restore order.

CDL is a leading source for everything linked to The Young and the Restless. Check back regularly for Y&R spoilers and news!</p