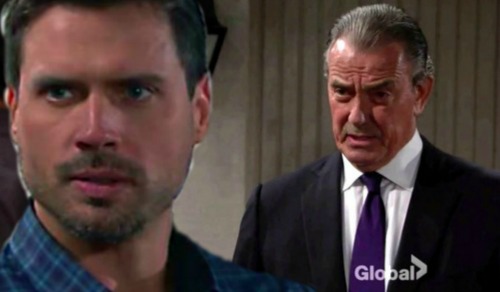 The Young and the Restless (Y&R) spoilers tease that the backlash will continue for Nick (Joshua Morrow). His decision to give up his trust fund will lead to many questions. In addition to the Newman drama, Sharon (Sharon Case) will grill Nick about his latest move. She’ll wonder if he’s sure this is the right call.

After all, Nick has kids to think of. Faith (Alyvia Alyn Lind) and Christian (Jude and Ozzy McGuigen) undoubtedly have their own trust funds, but this could bring major life changes for Nick. Anything that affects him will affect his children as well.

That’s especially true for Noah (Robert Adamson). Next week, October 16-20, The Young and the Restless spoilers say Noah will confront Nick about his astonishing charity donation. He’ll remind his dad that they’re in the middle of a huge expansion project. Noah will think they could’ve used that money to make their efforts successful.

Nick will defend his choice and contend that his wealth is going to a great cause. He might urge Noah to think of all the people that can be helped with this money. However, Noah will still be worried about the rest of their project. He never would’ve suggested expanding if he’d known Nick was going to toss out all his cash.

Of course, the tension in Nick and Victor’s (Eric Braeden) relationship will come up. Sharon and Noah may think this Y&R war has gone on long enough. They’ll likely push Nick to put his spite aside and make peace with his father. Faith has been having a rough time with their hostility, so this would certainly help her out.

Resolving this conflict would help Nick, too. This mess has been taking a toll and there’s only one way to stop it. Since ruthless Victor will never cave in, Nick will have to be the bigger person. He’ll determine that he should try to establish harmony within the Newman clan.

How will Victor react when Nick reaches out? The Young and the Restless spoilers hint Nick may be in for a shock. Based on Victor’s track record, there’s a good chance he’ll snap Nick’s olive branch in half! Victor is pretty steamed right now, so he may not be willing to forgive and forget.

Even if Victor does agree to call off this fierce battle, he could easily stab Nick in the back. It’s best to be careful whenever Victor’s involved. We’ll give you updates as other Y&R news comes in. Stay tuned to the CBS soap and don’t forget to check CDL often for the latest Young and the Restless spoilers, updates and news.