The Young and the Restless Spoilers: Sparks Fly for Trapped Scott and Abby – Love Blooms As Couple Await Rescue

BY Heather Hughes on November 11, 2017 | Comments: one comment
Related : Soap Opera, Television, The Young and the Restless 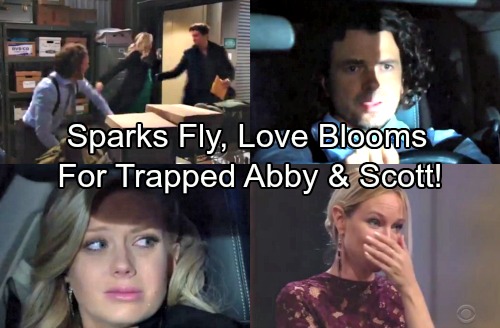 The Young and the Restless (Y&R) spoilers tease that Abby (Melissa Ordway) will find herself in a terrible situation. She’s had her fair share of doubts about Zack (Ryan Ashton), but she always managed to brush them off. Abby tends to be unlucky in love, so it’s easy to see why she’d overlook Zack’s flaws. She must’ve been desperate for one romance to finally work out.

Alas, this most definitely is NOT the one! The Young and the Restless spoilers say Zack will kidnap Abby and beg her to see his point of view. He’ll give Abby a chance to let go of her outrage and run away with him. Naturally, Abby will refuse. She’ll insist that she wants nothing to do with Zack now. 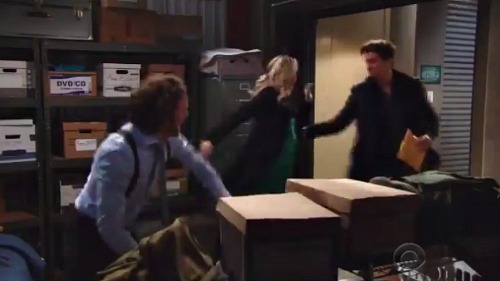 Scott (Daniel Hall) will get caught in the chaos as well. Y&R fans are in for some serious excitement as Zack takes control. He’ll shove Scott and Abby into a storage unit while he makes his getaway. The Young and the Restless spoilers indicate that a horrified Abby will embrace Scott. She’ll reel over one of the worst nights of her life.

Scott will assure Abby that everything’s going to be OK. He’s dealt with far worse ordeals than this. If Scott can survive being held hostage in the Middle East, he’ll be certain that Paul (Doug Davidson) can find them in a storage locker.

Of course, it could take the Keystone cops a while! Paul and his crew aren’t going to win any awards for their investigative skills. Regular ol’ citizens tend to make the most progress when lives are on the line. After all, Scott and Sharon (Sharon Case) did more to crack the sex ring case than Paul ever did.

Nevertheless, Scott will want to stay strong for Abby’s sake. She’ll be a mess as she realizes just how blind she was. Abby will hate that she ignored all the warning signs Zack gave her. She’ll think she really blew it.

Scott will feel guilty about not coming forward with his full suspicions. He’ll feel like he should’ve worked harder to make sure Abby was out of harm’s way. Abby might contend that she wouldn’t have believed Scott anyway. They’ll probably agree that they’ve been too harsh with each other.

The Young and the Restless spoilers state that Abby and Scott will reach a new understanding. They’ll grow much closer as they wait for help in the storage unit. Will love begin to bloom? Will they share a kiss or even something more?

Perhaps Zack and Abby will emerge from this mess with dangerous feelings. Sharon wouldn’t be too happy about that! We’ll give you updates as other Y&R news comes in. Stay tuned to the CBS soap and don’t forget to check CDL often for the latest Young and the Restless spoilers, updates and news.