The Young and the Restless Spoilers: Week of September 25 – Lily Files For Divorce – Victor Gets Pics – Shocking Kidnapping 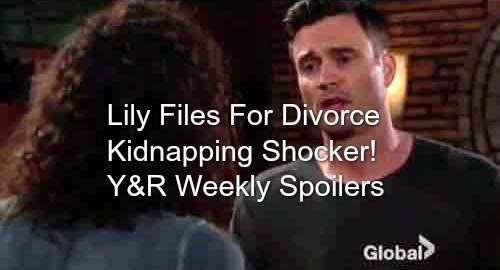 The Young and the Restless (Y&R) spoilers for the week of September 25 to 29 tease that some stunning moments are on the way. For starters, Victor (Eric Braeden) will get a special delivery. It sounds like the pictures Graham (Max Shippee) sent will finally arrive. Once Victor sees Jack (Peter Bergman) and Nikki’s (Melody Thomas Scott) romantic photos, he’ll have revenge on his mind.

Meanwhile, Jack will face trouble from a different source. Dina (Marla Adams) will become increasingly irritated by Jack’s relationship. She’ll insist that Nikki’s all wrong for her son, but Jack will defend his interest in her. Furthermore, Jack will remind Dina that he’s a grown man and doesn’t need dating advice from his mommy.

Ashley (Eileen Davidson) will work on a new scheme in the week ahead. You can bet that this involves Graham. If Ash wants Dina to believe Graham is manipulating her, she’ll have to pile on the proof. The Young and the Restless spoilers hint that Ashley will dig deeper than ever, but she may be making the biggest mistake of her life.

Elsewhere, Abby (Melissa Ordway) will proceed with caution. She’ll keep Zack (Ryan Ashton) out of the loop on a few things as she works to protect herself. Abby likes Zack, but she’ll continue to see some warning signs. As Zack displays iffy behavior, Abby will have to decide how she’s going to handle it.

Zack doesn’t know it yet, but his ruse is about to hit two major snags – Mariah (Camryn Grimes) and Tessa (Cait Fairbanks)! The Young and the Restless spoilers state that they’ll be done with guessing games. They’ll take a huge risk in hopes of getting the information they need.

That means Alice (Tamara Clatterbuck) is in for a rough time. Tessa and Mariah will kidnap the den mother of this sex ring. They’ll seek answers, but Cassie’s (Camryn Grimes) lookalike will catch Alice off guard. After Alice faints in the ranch stables, they’ll have another dilemma to deal with.

Sharon (Sharon Case) will join their efforts soon enough. She’ll be upset that Mariah and Tessa put themselves in danger, but she won’t pass up the chance to grill their hostage. Across town, Y&R spoilers say Lily (Christel Khalil) will make a choice that devastates Cane (Daniel Goddard). She’ll reveal that she plans to file for divorce.

Should Cane fight or simply walk away? Is there still hope for his marriage? We’ll give you updates as other Y&R news comes in. Stay tuned to the CBS soap and don’t forget to check CDL often for the latest Young and the Restless spoilers, updates and news.