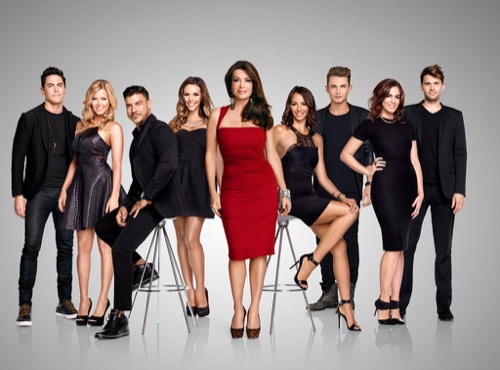 The Sonoma trip had had some drawbacks. The group that had gone had been pretty easygoing and they had all loved to laugh however the RV and Jax could put a downer on any vacation. The RV had gotten messy and disgusting by day two and the same could be said about Jax. Jax has always had his douchy ways and usually he tended to have a way back from that. But he went too far when he started joking that Brittany should show her boobs because he had paid for them. Jax hadn’t been the one that brought and instead it had been Scwartz who had asked who was showing off their chest for the cameras. So Jax’s actual problem and the fact he had upset Ariana had been because he went too far.

Jax could be fun like when he dares Tom to ask someone to sign his flat iron. However, Tom had gotten his flat iron signed by Austin Dillon and he had been so proud of his flat iron afterward. So if Jax could be like that all the time and not be jerk or downright insulting to his girlfriend then the trip wouldn’t have been so bad yet Jax is Jax for a reason. He does these things that are incredibly rude and is somehow always forgiven so that’s why he still believes he could get away it. And so it was interesting for a change that he couldn’t get away with it in Sonoma. Jax had also been very critical of Brittany for every single thing and the others had let Brittany that it wasn’t her.

Brittany shouldn’t have to tell her boyfriend to not to use too much toilet paper or he’ll clog up the bathroom because she shouldn’t have to deal with someone that’s constantly looking for a fight. Yet, things in Montauk were surprisingly not that much better. The girls had enjoyed themselves and of the four of them there had been three that had actually made an effort with the people they later lunched with at the clambake though Scheana was unfortunately a wet blanket. Scheana constantly found things she didn’t want to do even when the others wanted to do them and she had been the same way at the clambake. Scheana didn’t like seafood and she made it her mission to keep repeating that.

Scheana had told the girls when it was just them that she didn’t like seafood and so Stassi had asked her to pretend because Stassi hadn’t wanted Scheana to ruin the mood. Though later at the clambake, Scheana had told their hosts who were throwing the clambake that she didn’t like seafood and she had also talked about her dislike even as the others were eating. She had asked them how could they eat this or that because they had claws. So she had gone out of her way to be offensive in a situation and the one thing that saved her had been the fact the others had started to zone her out. Stassi had wanted to meet someone and both Katie and Kristen had been trying to help.

The girls had looked into who was single and who was in a relationship. So Kristen and Katie had actually did what they set out to do. They had said that they were going to find someone to help Stassi get over her ex and they had eventually landed on Kyle. Kyle wasn’t Stassi’s normal type because she liked them with the tall, dark, and handsome while he was he was tall, blonde, and handsome. But Kyle was the guy that the others thought would be perfect for Stassi on vacation. He was interested and temporary however it had been hard for Stassi to see what Kyle brought to the table when there was another guy at the clambake that was traditionally her type.

Carl had matched all of her check boxes and he had been a flirt as well. However, Carl had made Stassi feel bad about being on a dating app and so she had been a little more willing to listen when Katie told her to go after Kyle. So Stassi was going to use the invitation to her friends’ house on the beach to see how things go yet she had gotten a little nervous when her friends told her Kyle had been talking about her the moment they got back home. Stassi had known that she was interested and that he was interested so her nerves had come about because she knew she shouldn’t waste the opportunity while it was there. And the more she freaked herself out, the less she could depend on Katie who did turn into Tequila Katie on vacation.

Tequila Katie could either be a very angry person that would lash at anyone given the chance or she could be this incredibly sillier version of Katie. So the silly version of Tequila Katie was what came out. She had tried to blow-dry Kristen’s hair out of the blue and she had also tried feed people cake. Which Scheana didn’t like because she had threatened to annul her own husband if he attempted to do that at their wedding. Yet, in the end, there was nothing Katie could do with what went wrong between Kyle and Stassi. Kyle when he’s sober is a great guy and then he turns into a huge insulting jerk when he has a few drinks in him.

Though at least he didn’t mistreat Stassi by telling her what women should do in relationships because that where Jax ultimately went wrong with Brittany in Sonoma.