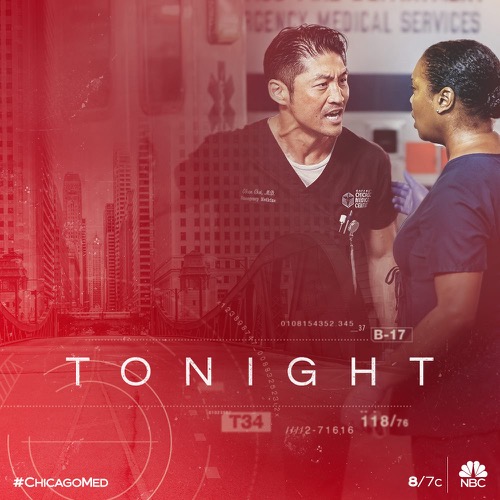 Tonight on NBC their medical drama Chicago Med airs with an all-new Wednesday, November 07, 2018, episode and we have your Chicago Med recap below. On tonight’s Chicago Med season 4 episode 7 called, “The Poison Inside Us,” as per the NBC synopsis, “The hospital is forced to evacuate when a toxic chemical is brought into the E.D., leaving patients and the staff in grave danger.

Stuck in an elevator, Dr. Charles and Dr. Manning are forced to take drastic measures with a pregnant woman. Goodwin is tasked with making difficult choices and Dr. Rhodes discovers a secret that Dr. Bekker has been holding from him.”

A last from Dr. Choi’s past proved to be threatening on tonight’s all-new episode of “Chicago Med”. The doctor has treated many people over the years and he didn’t always remember them or their loved ones, but tonight someone came to the hospital just to see him. Choi didn’t remember the man and he asked if they had met. It turned out they had. Mr. Patrick used to have a wife named Megan and she died while under Choi’s care. Patrick blamed the doctor for what happened to his wife and that’s why he went to the hospital with a small tank of harmful chemicals. It had warnings and crossbones signs all over it. And Patrick carried it in his hands as he confronted Choi because he wanted the doctor to answer his questions.

Dr. Choi was being interrogated in one of the treatment rooms while the rest of the hospital carried on as normal. The hospital had shown off to the board all the new and important stuff was going on. So that’s how Dr. Rhodes learned the truth about his hybrid OR. He ran into his father who admitted he was now on the board and so that led him to question how that happened. Rhodes asked Garrett and he found out that his father had more or less paid for his hybrid OR. It was precious to Dr. Rhodes and he thought his father was manipulating him again by using his passion project against him. He was so upset that he demanded to know who else knew about his father’s donation and that how he came to figure out that Dr. Bekker knew.

Dr. Rhodes had been so upset by that revelation that he hadn’t even wanted to be around Bekker. He found the first patient he could find and who just so happened to have been placed in his OR, and he treated him. He wanted to know what was causing the patient to have a nasty cough that he focused solely on that and was going to ignore the fact Dr. Bekker came into the room right after him. She had wanted to explain herself and she thought the patient would give her enough cover to say what she had to say however their conversation was put on hold because of what happened at the hospital. Dr. Choi had informed Mr. Patrick about what happened to his wife Megan and how she came to die and that had been the only thing keeping the widow together.

Patrick heard that his wife died because she couldn’t breathe and he wanted Choi to feel the same. He released the chemical and it was only after he did it that Choi was able to subdue him. The doctor knocked out and then alerted the hospital that the patients were at risk. Some chose to flee with their patients and others couldn’t do so because of their location. Rhodes and Bekker were one of the few that chose to stay. They couldn’t move their patient and so they chose to shut their doors knowing that it would keep out the toxic fumes. They were safe when the Code Orange went into effect and not everyone else could say the same. The Code Orange locked down everything which included the elevators.

It trapped Dr. Manning and Dr. Charles with her patient. The patient was bipolar and pregnant. She had a bad accident and it caused some bleeding. Dr. Manning was taking her up to the OR because the patient needed an emergency C-section and so the elevator shutting down on them left them stuck. The two doctors had to pry the doors opened to see where they were and unfortunately there were on the one floor that was going under renovation. There was no one else around and neither the doors or the elevator was going to bring their patient to a doctor in time to save her baby. It all came down to Manning and Charles. They had to guess at the surgery and do their best to save both mother and baby.

Doctors were doing everything they could with what little they had inside of the hospital yet outside wasn’t so pleasant either. There had been quite a number of people that had gotten injured because they breathed in those toxic fumes and one of the worst cases was Dr. Choi. He tried to treat others before he treated himself and he passed out before anyone could guess there was something wrong. It was April that stood up and demanded that he get the best treatment possible. She also risked her own life by running back into the hospital in order to get the necessary drugs for her ex-boyfriend and so April kept everyone from giving up on Choi. She had talked Halstead into doing certain things that he wasn’t sure of and neither came to regret that decision because they both wanted to save Choi.

Only Halstead found himself in a lot of trouble. He advised Ray Burke as a doctor when the authorities told him to back and the doctor didn’t regret his choice. He saw that Ray was getting worse by the minute and told him to come to the hospital for an MRI. He also said that he would have Ray out again in an hour and that didn’t work out because of the attack on the hospital. It left Ray trapped. He was safe on the floor he found himself trapped on and so he wasn’t the one that got into Halstead’s face. That had been Ray’s sons. The sons knew that Ray had an important meeting with people from out of town and they needed Ray to be there to get some deal. The cops had also wanted this meeting to happened and so Halstead’s interference upset everyone.

He was getting blamed from all sides because he put Ray’s life first. His own brother said that he should have stayed out of the way and so Halstead could only say in his defense that he didn’t plan for the attack to happen. It had been a deranged individual that did it. Jacob Patrick later died from being so close to the chemicals and he was long when the authorities finally realized he had released cyanide at the hospital. There was no cure for cyanide and so Halstead, as well as every other doctor, did their best to treat the symptoms even if it was a full-on cure. He did what he could and so did Manning. She thought Charles had gotten a call through to the OBGYN and that she was being guided into delivering her patient’s baby.

It turns out Charles had faked the call. He needed Manning to trust her instincts and he showed her what she created when she did. It had made Manning think her instincts and how she had been ignoring them by listening to Halstead’s lies. And so she finally confronted him when she learned that whatever it was that was bothering him had somehow given him an ulcer.

Halstead ended up lying again, but often it was the truth that set people free.

April realized she still had feelings for Choi around the same time his ex-came back to town to see him and so she might have left things a little too late with the man she loved.

Bekker also admitted that she had approached Rhodes’s father to get him that OR because she hadn’t wanted him to leave the hospital and despite what she feared she learned that Rhodes still feelings for her as well.