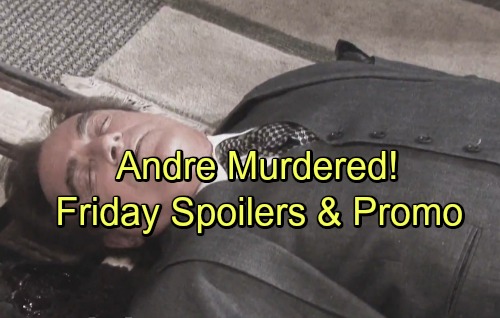 Days of Our Lives (DOOL) spoilers for Friday, January 19, tease that Abigail (Marci Miller) will stand up for Andre (Thaao Penghlis). Chad (Billy Flynn) suggested that all the evidence is pointing in Andre’s direction, but Abby just won’t buy it. She’ll argue that Andre wouldn’t lie to her, especially about something like this.

Abigail has grown to trust Andre and she doesn’t think he’d be willing to sabotage DiMera Enterprises. She’ll insist that Andre can’t be the culprit, but Chad will disagree. They’ll do some mild bickering in Friday’s episode.

Days spoilers say Chad will explain his accusations, but Abigail will want to give Andre the benefit of the doubt. Of course, DOOL fans know Andre’s indeed guilty and he’s about to get what he has coming! Since Andre’s murder is looming, some major drama’s on the way.

In the meantime, Gabi (Camila Banus) will explode over Andre’s latest move. She just got fired, but she’s not walking out that door without speaking her mind. Gabi will make it clear that Andre messed with the wrong woman!

In the other room, Vivian (Louise Sorel) and Stefan (Tyler Christopher) will clash. She’ll contend that having Andre killed is the only solution. Days of Our Lives spoilers state that Stefan will reject that proposal. He’ll argue that they shouldn’t stir up any more trouble than they have to.

Later, Abigail will be shocked when stumbles across Andre’s dead body. This murder mystery will officially kick off, so every Salemite will be buzzing about it soon enough. Elsewhere, Lucas (Bryan Dattilo) be fresh out of rehab. He’ll be ready to take charge of his life and find some happiness.

Days of Our Lives spoilers say Lucas will catch up with Kate (Lauren Koslow) on Friday. He’ll open up about his rehab stint and how his recovery’s going. Lucas will feel good about the direction things are headed in now.

Afterward, Lucas will ask Chloe (Nadia Bjorlin) to go out with him. She’s about to head off on a trip, so she may have to take a raincheck. Whatever happens, at least Lucas is getting his confidence back. We’ll give you updates as other Days news comes in. Stay tuned to DOOL and don’t forget to check CDL often for the latest Days of Our Lives spoilers, updates and news.