Days of Our Lives Spoilers: Battle Over Holly Begins – Who Will Raise Nicole’s Daughter? 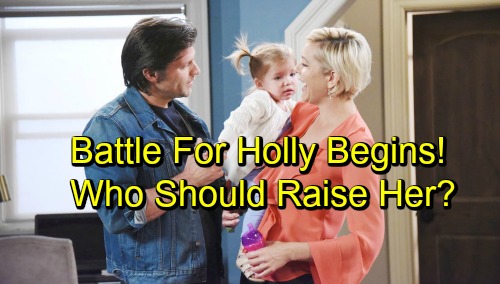 Days of Our Lives (DOOL) spoilers tease that Nicole’s (Arianne Zucker) death will have serious ramifications for many Salem residents. Eric (Greg Vaughan), of course, is still reeling from the trauma of losing Nicole and will be for a while. Maggie (Suzanne Rogers) is devastated, and Chloe (Nadia Bjorlin) will be as well.

With Nicole’s death comes a big question regarding her daughter Holly. Who will assume primarily responsibility for raising Holly now? When Nicole was trapped in the debris and knew she was probably going to die, she asked Eric to take care of Holly. And Eric certainly seems to want to do so.

Knowing Eric, he’ll want to follow through on his promise to his beloved Nicole and raise Holly himself. But he’ll likely need some help and support to raise the little girl. Who else might want to step in and have a hand in raising Holly?

Well, first off, there’s Maggie, who is Holly’s grandmother. Maggie loves children, and she’d probably relish the opportunity to help raise Daniel’s (Shawn Christian) daughter. In fact, Maggie might assume that with both Holly’s parents gone, the primary responsibility for raising Holly should go to her.

Another contender to raise Holly might be Chloe. Chloe carried and gave birth to Holly as a surrogate for Nicole, and she has always felt a strong bond with Holly. It wouldn’t be surprising if Chloe approached Eric about a co-parenting sort of relationship with him.

And there’s always Sarah (Linsey Godfrey), who was close with Nicole off-screen. Sarah seems to really care about Holly’s welfare, so she might emerge as a potential mother-figure for Holly. After she and Rex (Kyle Lowder) separate, she might need a new focus, and Holly could conceivably be it.

It seems that there may be multiple mother-figures who emerge as possible caretakers for Holly, in addition to Eric. Who do you think should raise Holly? Stay tuned to DOOL and don’t forget to check CDL often for the latest Days of Our Lives spoilers, updates, and news.