Days of Our Lives Spoilers: Ben Framed By Tripp In Stunning Twist – Ciara Makes Love to Tripp, Turns Against Ben 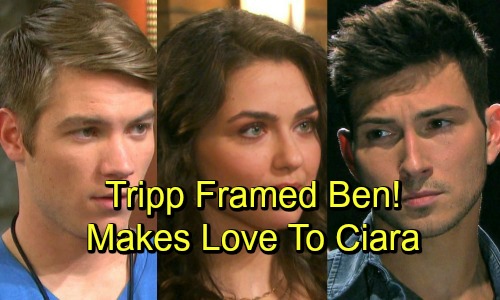 Days of Our Lives (DOOL) spoilers tease that Ben (Robert Scott Wilson) will continue to proclaim his innocence. He believes he’s been set up by Hope (Kristian Alfonso), but he has no way of proving it. Unfortunately, Ciara’s (Victoria Konefal) faith in Ben has dried up. She’s siding with her mom, so Ben will struggle without his lifeline. He’ll hate the fact that Ciara’s no longer in his corner.

Things will get worse for Ben over the next couple weeks. It’ll look like he’s really going down for this. DOOL fans know a can of accelerant was found in the cabin area. It had Ben’s fingerprints on it, so Hope feels like this case is a slam dunk. She won’t care about the suspicions she’s facing as long as Ben gets locked up.

Days spoilers say Rafe (Galen Gering) and Shawn (Brandon Beemer) will try to figure out if Hope played dirty, but they may be on the wrong track. Hope’s claims seem genuine, but so do Ben’s. After all, Days of Our Lives brought Ben back for a redemption arc. Robert Scott Wilson’s on contract, so they’re certainly not going to put Ben away for murder again.

However, DOOL probably won’t take Hope down the dirty route again either. Tripp (Lucas Adams) seems like a much better framing culprit, especially when you consider what’s brewing. Days of Our Lives spoilers say Ciara will feel deeply betrayed by Ben. Her pain will push her closer to Tripp, so they’ll make love during the week of October 1-5.

Naturally, the situation will shift once the truth comes out. Ciara may regret hopping in bed with Tripp once Ben’s name is cleared. That’s especially true if Tripp turns out to be the one who framed him! We also know Ciara’s ex, Wyatt (Scott Shilstone), will be back in the picture by November. It’s possible Wyatt and Tripp were in cahoots on this.

Regardless, “Tiara” love won’t be in the air for long. It’ll be back to “Cin” city after Ben gets off the hook! Will this finally establish true trust between Ben and Ciara? Will they break the final barrier toward becoming a couple? We’ll give you updates as other Days news comes in. Stay tuned to DOOL and don’t forget to check CDL often for the latest Days of Our Lives spoilers, updates and news.