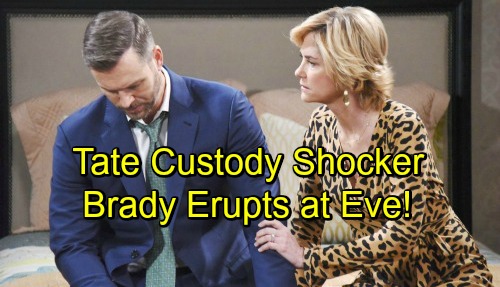 Days of Our Lives (DOOL) spoilers tease that Brady (Eric Martsolf) will face some difficult blows. Next week, he’ll start things off on a sour note when he gets some upsetting news. Theresa (Jen Lilley) will get in touch with Brady and offer updates regarding Tate (Colin and Kyle Schroeder). She’ll most likely suggest she’s not bringing their son back anytime soon.

Kimberly (Patsy Pease) might need treatment out of the country. If so, Theresa would surely want to support her mom through it. That means she’d also want to take Tate along. Theresa told Brady he could come visit in California anytime, but this could really throw off that plan.

Days fans could hear some conflict over the phone, but Brady will just have to accept the situation. He lost custody, so he doesn’t get a say in the matter. Of course, Eve’s (Kassie DePaiva) the reason the custody case went south. Brady and Theresa were all set to work out a solution until Eve contacted Victor (John Aniston), who ultimately intervened.

Theresa retaliated after the drugs were planted in JJ’s (Casey Moss) apartment, but Eve’s been keeping that tidbit to herself. Unfortunately, she won’t be able to hide it for much longer. After Jennifer (Melissa Reeves) makes some stunning confessions to Eric (Greg Vaughan), Eve will get caught in the fallout. Brady will realize his fiancée’s been lying to him the whole time.

Days of Our Lives spoilers state that Brady will confront Eve about her deception. He’ll naturally blow his top and demand some answers. Eve will assure Brady that she was only trying to help. She never meant for any of this to happen, but Brady won’t care about her motives. He’ll only care that Eve cost him custody of his boy.

To make matters worse, Eve pushed Brady to forgive Victor. That was just part of her plot to keep what she’d done under wraps. Days of Our Lives spoilers say that’ll add to Brady’s fury. He’ll eventually kick Eve to the curb, so she’d better be prepared for some DOOL heartbreak.

Days viewers won’t want to miss the explosive confrontation ahead. We’ll keep you posted as other details emerge. Stay tuned to DOOL and don’t forget to check CDL often for the latest Days of Our Lives spoilers, updates and news.