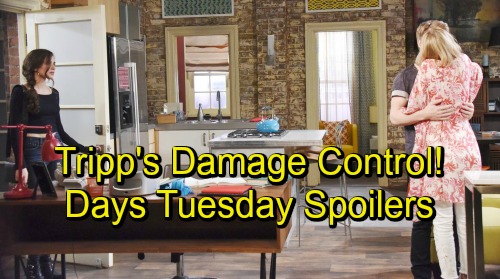 Days of Our Lives (DOOL) spoilers for Tuesday, September 18, tease that Hope (Kristian Alfonso) will face more suspicions. Ciara (Victoria Konefal) already questioned if her mom might’ve planted the proof against Ben (Robert Scott Wilson), but Hope swore on her life that she didn’t. Now Ciara appears to be siding with Hope, but Rafe (Galen Gering) will have his doubts about this “evidence.”

It’s strange that a whole team of arsonist experts found nothing, but Hope was suddenly able to prove Ben’s guilt. Like Ben pointed out, it seems a little too convenient. Days of Our Lives spoilers say Rafe will wonder what Hope’s been up to. She’s played dirty before, so Rafe will have every reason to think she might’ve done it again.

Nevertheless, Hope will insist that the evidence is legit. There was a can of accelerant at the cabin with Ben’s fingerprints on it, so Hope won’t see any other way to look at this. She’ll assure Rafe that Ben’s guilty, so she’s going to bring him down. Meanwhile, Shawn (Brandon Beemer) will confide in Belle (Martha Madison). He’ll also admit he’s worried about Hope’s potentially dirty tactics.

DOOL fans are growing curious about this mystery. Thanks to Ben’s hypnosis session, we pretty much know for sure he’s telling the truth. Does that mean Hope’s lying? Not necessarily. Tripp (Lucas Adams) would have just as much of a motive to frame Ben. Perhaps that’ll be an interesting twist that comes up later.

For now, Tripp will face Ciara’s fury. She just walked in on Claire (Olivia Rose Keegan) and Tripp’s steamy kiss, so she’ll lash out and demand some answers. Days of Our Lives spoilers state that Tripp will frantically try to explain. The lip lock just sort of happened after Claire received great news about Marlena (Deidre Hall). Tripp will assure Ciara that she’s still the only one he wants.

Days spoilers say Ciara and Tripp will get past this hurdle, but more obstacles await. Things aren’t looking good for this duo, so Ben has a shot after all. Over with John (Drake Hogestyn), he’ll do his best to control Hattie (Deidre Hall). Once John describes the details of Marlena and Hattie’s swap, he’ll work to make Hattie play the part correctly. Marlena’s life is at stake, so Hattie can’t blow this.

Some fantastic scenes are coming up in Salem. We’ll give you updates as other Days info emerges. Stick with DOOL and don’t forget to check CDL often for the latest Days of Our Lives spoilers, updates and news.