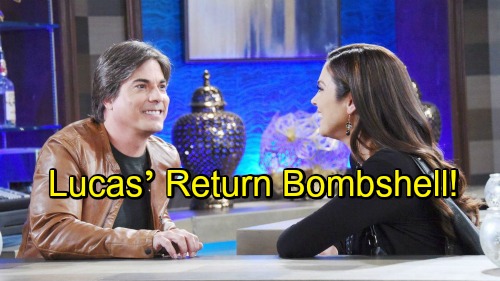 Days of Our Lives (DOOL) spoilers tease that Lucas (Bryan Dattilo) will return from his trip to Europe. After spending time with Allie and doing some soul-searching, Lucas will be ready to come home. Unfortunately, it won’t be for long. DOOL fans can expect Lucas’ Days stint to officially end soon enough.

Dattilo filmed his final scenes at the NBC soap a few months back. Once those scenes hit the air, it’ll be the end of the road for Lucas. There’s always a chance Lucas will return at some point, but Days doesn’t seem to have any foreseeable plans for the character.

As a result, they’ll need a way to usher Lucas off canvas in a more permanent fashion. That’s why Lucas will have to deliver a bombshell. He’ll have some stunning news for Chloe (Nadia Bjorlin) when he returns on December 6.

Days of Our Lives spoilers say Chloe will be excited to see Lucas. They declared their love before Lucas left, so things have been going well between them. Chloe will hope they can pick up right where they left off, but Lucas’ shocker should change the game. He’ll reveal something that could turn Chloe’s world upside down.

It’s possible Lucas will push for a kid since he recently lost “Baby Bonnie” aka Emily. She turned out to be Rex (Kyle Lowder) and Mimi’s (Farah Fath) child, so Lucas was heartbroken. It’s easy to imagine him wanting a replacement baby with Chloe.

Days viewers know how hard Chloe fought for Holly. In fact, she’ll continue that fight as the upcoming custody battle heats up. However, jumping into parenthood with Lucas might be a tough leap to take. Chloe may not be keen on another pregnancy either. Holly already exists and is loved, so that’s an entirely different situation.

Of course, Lucas could bring another bomb home instead. He might want to make a big move. Perhaps Lucas will determine that he needs to be near Allie all the time. Asking Chloe to pack up and leave for Europe with him would be a bit much. It’s doubtful Chloe could get on board with that, especially since it’d mean uprooting Parker (Christian Ganiere).

No matter what shocker he shares, Days of Our Lives spoilers hint that Chloe won’t be cool with it. It looks like Lucas may have no choice but to break it off and leave town. Will you miss Lucas once he’s gone for good? We’ll give you updates as other details emerge. Stay tuned to DOOL and don’t forget to check CDL often for the latest Days of Our Lives spoilers, updates and news.