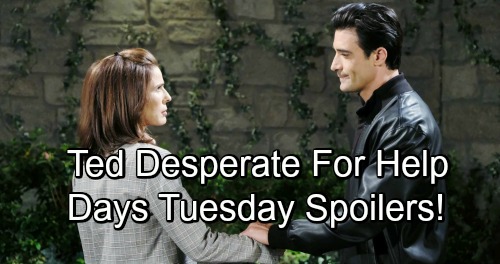 Days of Our Lives (DOOL) spoilers for Tuesday, November 27, tease that Hope (Kristian Alfonso) will battle some confusion. She just caught someone lurking behind her, so she whacked him to the ground in self-defense. However, it turns out Hope wasn’t in real danger. When this stranger gets up on Tuesday, Hope will realize she just attacked Ted (Gilles Marini).

DOOL viewers can expect Ted to be frantic. He’ll insist that Stefan (Tyler Christopher) and Kate (Lauren Koslow) pose a serious threat to his life. Ted will push Hope to hide him somewhere, but Hope won’t understand any of this. She’ll wonder why she should help Ted anyway. It’s not like Hope owes this smarmy attorney, so she may ask what’s in it for her.

Ted can’t offer much at the moment, but he’ll agree to assist with Ben’s (Robert Scott Wilson) takedown eventually. For now, Ted will just be desperate for protection. He’ll convince Hope to deceive Rafe (Galen Gering) and find him a hide-out to avoid the wrath of his enemies.

Other Days of Our Lives spoilers say Leo (Greg Rikaart) will tell a startling story. He wasn’t really dead when Will (Chandler Massey) and Sonny (Freddie Smith) got rid of him, so he recovered and made his way back to Salem. Leo will suggest that he’s returned for a wedding. DOOL fans will recall that he pushed Sonny to marry him before he left and used the sexual harassment lawsuit as leverage.

Now Leo can throw in potential attempted murder charges to force Sonny into this. Days spoilers say Sonny will be backed into a corner, but he’ll do his best to stall Leo. Sonny just got back together with Will, so he’ll hate the idea of losing him all over again.

Meanwhile, Kayla (Mary Beth Evans) and Stefan will face off. They’ll naturally clash about Steve (Stephen Nichols), who’s stuck in prison over an espionage misunderstanding. Days of Our Lives spoilers say Kayla will blame Stefan, but he’ll surprise her by offering help. You can bet Kayla will have some serious reservations about teaming up with Stefan again, even for a good cause.

Finally, Ciara (Victoria Konefal) and Ben will have a deep conversation about their feelings. It’ll lead to a passionate kiss, so stay tuned for major sparks. We’ll give you updates as other Days news comes in. Stick with DOOL and don’t forget to check CDL often for the latest Days of Our Lives spoilers, updates and news.