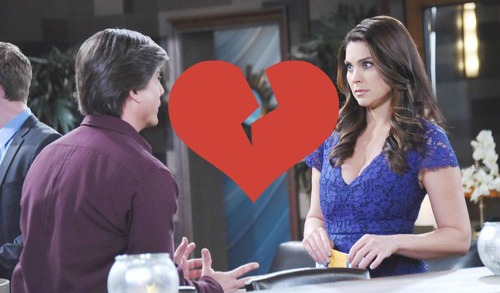 Days of Our Lives (DOOL) spoilers tease that Chloe (Nadia Bjorlin) will have some concerns soon. In fact, her worries may have been brewing for a while now. Chloe will begin to have doubts about her relationship with Lucas (Bryan Dattilo), so it should be interesting to see what the trouble is.

DOOL fans will recall that the whole reunion idea caught Chloe off guard. She was surprised when Lucas asked her out, his sweet smile won her over. Chloe left town for a while to perform in an opera, but Lucas was willing to be patient. He even stepped up after Chloe came home and eventually went missing.

Despite what everyone else tried to tell him, Lucas knew something was going on. He refused to give up on finding Chloe. Lucas has been incredibly kind and loving, but that may not be enough. Maybe Chloe’s just not feeling the same spark. She cares about Lucas, but that doesn’t mean they’re destined to be together. Perhaps Chloe’s starting to wonder if there are better options out there.

Days of Our Lives spoilers say Eric (Greg Vaughan) will pay Chloe a visit. He might pop in Doug’s Place and sense that Chloe’s distracted. Eric’s always up for listening to people’s problems, so he’d gladly hear Chloe out. It won’t take long for Chloe to unload all her issues and seek some advice.

Chloe might admit that Lucas is a great guy, but is he the right guy for her? She may not be so sure. Days viewers haven’t seen Lucas and Chloe on screen much lately. Chloe may feel like things are becoming distant between them. She could even be to blame for that.

If Chloe’s just not feeling this romance, she may be creating excuses to avoid Lucas. Chloe will inevitably hate the idea of hurting him, especially since he’s already been so unlucky in love. However, Eric will undoubtedly think honesty is the best policy. He may also point out that fresh starts can be fantastic.

Eric never thought he’d get over Nicole (Arianne Zucker), but he ultimately found love with Jennifer (Melissa Reeves). He feels like everything worked out like it should, so he may push Chloe to go after what she wants. Eric may think true happiness is just around the corner for Chloe.