Days of Our Lives Spoilers: Ciara Panics as Ben Comes Unhinged – Trusting Him Was a Terrible Mistake 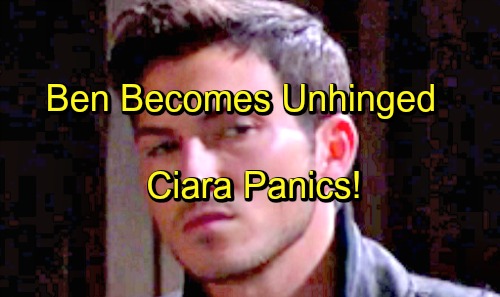 Days of Our Lives (DOOL) spoilers tease that Ciara’s (Victoria Konefal) playing with fire. She’s letting Ben’s (Robert Scott Wilson) good looks and softer side blind her. Ciara was initially terrified of Ben, but he’s slowly gaining her trust. DOOL fans can expect that trust to grow in the week ahead.

Ciara and Ben will definitely form a stronger bond. They’ll develop a real friendship and perhaps even head into romantic territory. Ben was locked up for quite some time, so he’s probably desperate for some female attention. Of course, he also likes how Ciara seems to care about his struggles.

Similarly, Ciara’s connecting with Ben’s outsider mentality. She understands what that feels like and appreciates having somebody to listen. They’re hanging out in a small, secluded cabin together, so love could be in the air. Ciara tends to be impulsive, so nobody would be surprised by a kiss.

Regardless, it’s a mistake to fall fast and hard. In fact, it may be a mistake to trust Ben at all – at least this soon after his release. During the week of July 2-6, danger will strike. Days of Our Lives spoilers say Ben will have a major meltdown. Something will spark some serious rage, so he’ll start to come unhinged.

Ciara will quickly begin to panic. Part of her may worry that Ben’s been playing some twisted mind game. Another part of her will simply think Ben’s headed for a relapse. Whatever the case, Ciara will certainly fear for her life. She’ll wonder if she’s going to survive the peril, but Days fans know she will.

Hope (Kristian Alfonso) or Tripp (Lucas Adams) might arrive in the nick of time. Then again, Ciara herself could handle this and potentially bring Ben back to reality. She could be his light in the darkness. Days of Our Lives spoilers say this should cause a setback in the trust department, but they can always rebuild it. There’s no rush in this summer of “Cin.”