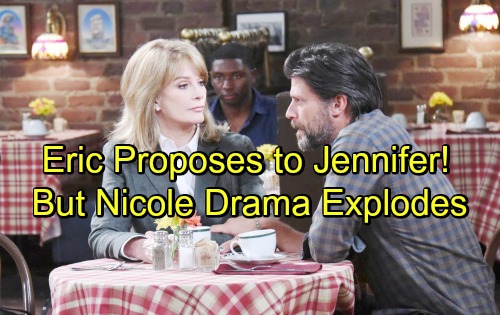 Days of Our Lives (DOOL) spoilers tease that Jennifer (Melissa Reeves) will learn how the drugs ended up in JJ’s (Casey Moss) apartment. She’ll take some of her initial findings to Brady (Eric Martsolf), but she’ll need more proof to back them up. Jennifer has to be positive if she’s going to clear JJ’s (Casey Moss) name.

It looks like Jennifer will eventually score what she needs. She’ll confront Victor (John Aniston) and Eve (Kassie DePaiva) about their decision to play dirty, but some major twists are brewing. After the fight winds down, Eve will deliver a shocker. She’ll insist that she has some information that could change everything for Jennifer – and not in a good way.

Eve may note that if Jennifer uses the proof to clear JJ, he’ll still be in trouble for lying to the judge. She may raise the stakes with the Nicole bombshell as well. Eve would be willing to expose the whole story to Eric if need be. She may argue that they should just keep each other’s secrets and let this go.

Eve will be desperate to preserve her own relationship with Brady. He might leave her if he knew she cost him custody of Tate (Colin and Schroeder), so this could be her last chance to save herself. As for Jennifer, she’ll be unbelievably torn. It’ll be about more than just JJ and the drugs at that point. Jen will also have to think about how honest she needs to be with her beau.

Days spoilers say Jennifer may consider revealing the truth herself. She certainly won’t like the idea of lying to Eric, especially about something so huge. However, Eric’s about to make a shocking move. DOOL fans can expect Eric to pop the question on a new Days episode August 2. He’ll want to spend the rest of his life with Jennifer, so he won’t see why he should wait on this proposal.

Will Jennifer come clean or take the selfish route? Will she accept Eric’s offer of marriage and keep the big secret? Deception seems likely since Nicole’s headed back to town later this year. Days of Our Lives spoilers say Eric and Jen’s romance is sure to blow up!

It sounds like some stunning moments are coming up in Salem. We’ll give you updates as other Days of Our Lives details emerge. Stick with DOOL and don’t forget to check CDL often for the latest Days of Our Lives spoilers, updates and news.