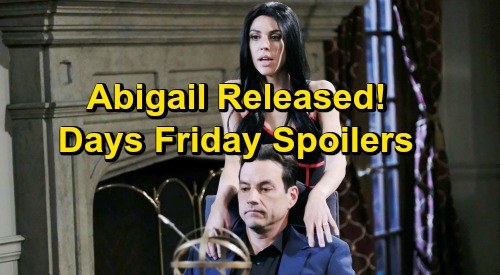 Days of Our Lives (DOOL) spoilers for Friday, December 7, tease that Gabi (Camila Banus) and Kate (Lauren Koslow) will do a little more scheming. It seems like they just keep digging a bigger hole for themselves. DOOL fans know suspicions are swirling thanks to Abigail’s (Kate Mansi) accusations and Gabi’s risky behavior. Kate’s worried that this grand plan is going to blow up in both their faces.

That’s why this part of the plot is so important. Gabi needs to expose the truth about Charlotte’s paternity, but she has to do it without implicating herself. Days spoilers say Stefan (Tyler Christopher) will become a target on Friday. Kate and Gabi will plot to frame Stefan, so it sounds like they’ll want him to take the fall for messing with the paternity test results.

Of course, this scheme won’t go as expected. Days of Our Lives spoilers say Gabi will get busted by Julie (Susan Seaforth Hayes) next week, so this is turning into an epic disaster. In the meantime, Stefan sign off on Abigail’s release from Bayview. He’s not sure “Gabby’ is really back, but he desperately wants to believe it. Stefan will take a leap of faith, but he’s obviously in for a rude awakening.

Days spoilers state that Rafe (Galen Gering) will face a shocker as well. He’ll track Hope (Kristian Alfonso) down and realize she’s with Ted (Gilles Marini) in a hotel room. The compromising situation will lead to Rafe’s temper tantrum and Ted’s boasting. The sly attorney will make Rafe believe there’s more to this than just Ben’s (Robert Scott Wilson) takedown, so Rafe’s fury will erupt.

Speaking of Ben’s takedown, it looks like Ted and Hope’s next attempt will fail. Ben’s been busy growing closer to Ciara (Victoria Konefal), so he keeps brushing off Ted’s efforts to talk. Even if Ted can somehow meet with Ben and trick a confession out of him, there’s no way this is going to work. Hope’s goal is to keep Ciara away from Ben, but trapping him like this would only push them closer.

Try as she might, Hope just won’t be able to stop Ben and Ciara’s budding romance! We’ll give you updates as other Days of Our Lives news comes in. Stay tuned to DOOL and don’t forget to check CDL often for the latest Days of Our Lives spoilers, updates and news.