Days of Our Lives Spoilers: Chad and Abigail Fight to Repair Damaged Relationship – Kate Mansi Back for Classic ‘Chabby’ Reunion 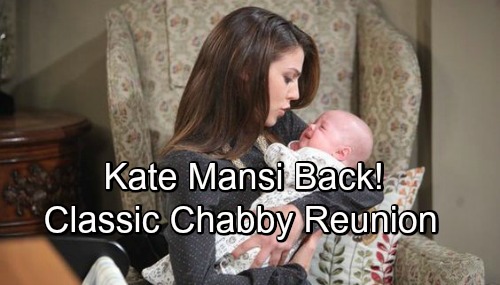 Days of Our Lives (DOOL) spoilers tease that changes are brewing for Chad (Billy Flynn) and Abigail (Marci Miller). They’ve already been through so much, but even more drama’s ahead. During the week of November 5-9, Chad will abduct Abigail for her own good. He’ll feel like he’s saving her from Stefan (Tyler Christopher) as well as herself.

Chad believes the alter scheme Gabi (Camila Banus) cooked up, so he’ll think he’s doing the right thing. However, Chad will battle doubts later. How can he hold the woman he loves against her will? Chad will nearly let Abigail have her freedom, but she’ll go into labor first. Soon after, Chad will deliver their second child and hopefully ease the tension with his ex.

Days spoilers say Gabi’s (Camila Banus) deception will ultimately be exposed, so that’ll be another positive step. Chad and Abigail only fell apart because of this kid’s paternity, which was a setup by Gabi. The baby actually belongs to Chad, not Stefan. Once Chad and Abigail know the truth, will that mend their broken bond? It’ll help, but we probably shouldn’t bet on everything being hunky-dory.

DOOL tends to take their time with reunions, so that may be what they’ll do here. That would actually work well with the looming Abby switch. Marci Miller will be exiting the role of Abigail by the end of November. It won’t be long until Kate Mansi takes her place.

Unlike most recasts where we have to get used to someone new, many Days viewers are already familiar with Mansi. She won a Daytime Emmy for this role, so she’s clearly a stellar performer. However, the transition could still benefit from a slow burn back to “Chabby.”

Mansi and Flynn always had off-the-charts chemistry, which worked best when Abby and Chad pining and building toward something. Days of Our Lives may capitalize on that. It’d be nice to see Chad and Abigail slowly come together again.

After all, Abigail should be hurt by Chad’s blind belief in Gabi. Once upon a time, Chad never would’ve bought a story like that. Their connection used to be far too strong.

How many times has Abigail ignored the evidence and put her faith in Chad? Remember how everyone thought Chad was the killer during Ben’s (Robert Scott Wilson) crime spree? Abigail chose to believe the man she truly loved. She didn’t give up on Chad after Andre’s (Thaao Penghlis) brainwashing either.

Since Chad sided with Gabi, he could be in the doghouse for a while. Fortunately, Days of Our Lives spoilers say Chad will put in the effort. Once Chad and Abigail find their way back to each other, maybe we’ll get another wedding. That’d be great for fans who love classic “Chabby.” There have been other versions, but Mansi and Flynn are the duo that put the couple on the soap map.

It sounds like some gripping scenes are coming up. We’ll give you updates as other Days news emerges. Stick with DOOL and don’t forget to check CDL often for the latest Days of Our Lives spoilers, updates and news.