Days of Our Lives Spoilers: Kate Mansi Returns For Charlotte and Revenge November 29 – Marci Miller Exits With Abigail Locked Up 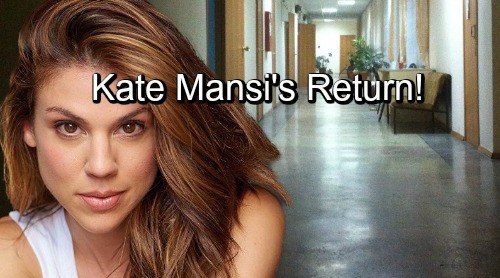 Days of Our Lives (DOOL) spoilers tease that Chad (Billy Flynn) will unknowingly deliver his own daughter. After abducting Abigail (Marci Miller), he’ll help her give birth to little Charlotte at the cabin. Thanks to Gabi’s (Camila Banus) manipulation, Chad still won’t know the baby is his own.

However, it won’t matter much in that moment. Chad will bond with Abigail and they’ll take steps toward being a family again. Unfortunately, a DOOL storm will be brewing back in Salem. Days of Our Lives spoilers say Stefan (Tyler Christopher) will find incriminating evidence. He’ll learn Gabi tricked him into believing “Gabby” had returned.

Gabi will push Stefan to keep his mouth shut if he wants to raise the kid. She’ll warn that if Chad and Abigail get back together, they won’t let him near the baby. Next, Chad will make a difficult phone call. He still believes Abigail is mentally ill, so he’ll choose to betray her for her own good.

Chad will feel like he has to put Abby’s health first. He’ll offer Stefan a deal and hope his brother takes it. Days of Our Lives spoilers say Stefan will accept the offer, so Abigail’s in for a huge shock. She married Stefan because she knew he wouldn’t commit her – or so she thought. Without the promise of “Gabby’s” return, Stefan won’t have any reason to keep his word.

Days spoilers say Stefan will sign the papers and let them haul Abigail off to the sanitarium. In return, Stefan will get Charlotte. It’ll be a brutal scene for Chad to watch, but he’ll think it’s the right thing to do. Jennifer (Melissa Reeves) will hit the roof over Chad’s sneaky move, so she’ll rip into him and prepare for war with Stefan. She’ll do everything she can to protect her new granddaughter.

Meanwhile, poor Abigail will be locked up for no reason. She’s perfectly sane, but she’ll have to suffer due to Gabi’s deception, Chad’s gullibility and Stefan’s ruthlessness. It looks like this will set up Marci Miller’s exit. She’ll be leaving the show this month, so that’ll pave the way for Kate Mansi’s comeback on November 29. A short sanitarium stint will allow for a nice transition period.

Once Mansi’s Abigail finally earns her freedom, she’ll unleash her wrath on Gabi like never before! We’ll give you updates as other Days news comes in. Stay tuned to DOOL and don’t forget to check CDL often for the latest Days of Our Lives spoilers, updates and news.