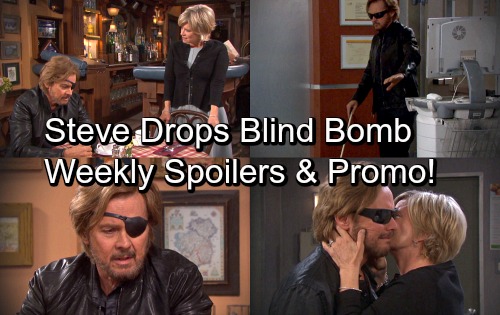 Days of Our Lives (DOOL) spoilers for the week of March 26-30 tease that we’ll a tough ordeal for Steve (Stephen Nichols). DOOL fans know that John (Drake Hogestyn) pumped Steve full of poison and it took a toll on his cornea. The damage couldn’t be repaired, so Steve’s known blindness was coming for a while now.

Nevertheless, it’s going bring some emotional moments when Steve finally faces the darkness. Once his vision is completely gone, he’ll sit by himself at the pub. It’ll be hard for Steve to admit that this is really happening. He’ll wait for Kayla’s (Mary Beth Evans) arrival so he can share the crushing news.

Days of Our Lives spoilers say Kayla will take one look at Steve’s face and immediately know that something’s up. She’ll ask what’s wrong and that’s when Steve will drop the bomb. He’ll reveal that he can’t see anything at all. 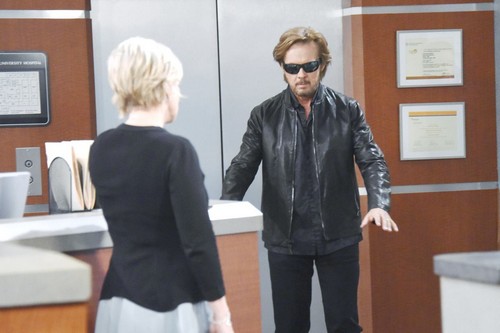 Kayla will think they should get Steve’s eye checked out just in case. She might hold out hope that things will clear up and Steve will get a little more time with his sight. Unfortunately, this is really it. Days of Our Lives spoilers state that an exam will confirm what Steve already knows.

At the hospital, Steve will tell Kayla that he’s blind now and they have to accept that. He’ll pretend he’s made peace with it, but he’ll just be trying to help Kayla deal with the situation. Days spoilers say Kayla will get Steve some sunglasses to wear. He’ll also try out a new cane, but it won’t take long for reality to set in.

Steve will feel like he’s going to become a burden and that’s the last thing he wants. He’ll let Kayla know he’s sorry for all this. Steve will suggest this isn’t what Kayla signed on for, but she’ll shut down any negative talk.

Kayla will point out that Steve has a good heart and going blind can’t change that. He’s the same man she married and she intends to stand by her soul mate. Days spoilers indicate that Steve will break down in Kayla’s arms. He’ll cry as he makes this difficult adjustment.

Marlena (Deidre Hall) will hate to see what Steve and Kayla are going through. She’ll know this is going to be rough on John as well. Marlena will research some experimental trials, but it appears her digging won’t get her anywhere.

Steve will focus on living life as a blind man, but there has to be light at the end of the tunnel. Sooner or later, Steve will undoubtedly get back to normal. We’ll give you updates as other DOOL details emerge. Stay tuned to the NBC soap and don’t forget to check CDL often for the latest Days of Our Lives spoilers, updates and news.