Days of Our Lives Spoilers Next 2 Weeks: Leo Back with Demands – Betrayed Abigail Blasts Chad – Ben and Ciara’s Sizzling Kiss 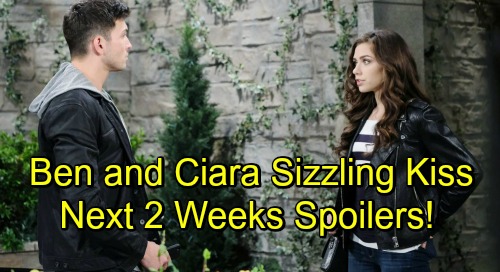 Days of Our Lives (DOOL) spoilers for the next two weeks tease that big changes are brewing. During the week of November 19-23, Valerie (Vanessa Williams) will get some startling news. She’ll find herself facing a tempting job offer in Washington, D.C.

Of course, this is something Valerie will want to mull over. Abe (James Reynolds) and Eli (Lamon Archey) are in Salem, so leaving them behind would be tough. Valerie will have to make a decision soon, but she’ll enjoy a distraction in the meantime. Doug (Bill Hayes) and Julie (Susan Seaforth) will serve a Thanksgiving feast at Doug’s Place. They’ll want their guests to forget all their troubles and be thankful.

Sheila (Tionne “T-Boz” Watkins) will get on Abe’s last nerve this week, but they’ll tolerate each other at the Thanksgiving table. Eli will make sure of it! Speaking of Eli, he’ll have Lani (Sal Stowers) on his mind. She rejected him a while back, but Eli won’t give up. Sooner or later, Eli will hope to be in a committed relationship with Lani.

At Bayview, Abigail (Marci Miller) will get physical after Gabi’s (Camila Banus) confession. She’ll let her enemy know she means business by throwing Gabi against the wall and grasping her neck. Chad (Billy Flynn) will intervene and side with Gabi as usual. He’ll believe her latest round of deception and assume Abigail’s gone off the deep end.

While Abigail’s restrained, Ben (Robert Scott Wilson) and Ciara (Victoria Konefal) will address their feelings for each other. After Ciara and Tripp’s (Lucas Adams) nasty breakup, Days of Our Lives spoilers say Ciara will let her guard down. She’ll share a tender moment with Ben, which will build to a kiss during the week of November 26-30.

That same week will bring a reunion for Will (Chandler Massey) and Sonny (Freddie Smith), but their happiness will be short-lived. Leo’s (Greg Rikaart) return will throw them both for a loop. He’ll be back from the “dead” to make Sonny keep his marriage promise. Will’s going to have some terrible competition, especially when Victor (John Aniston) makes an even bigger mess.

Other DOOL spoilers state that Ted (Gilles Marini) will make a comeback, too. He’ll corner Hope (Kristian Alfonso) and beg her for assistance. Ted won’t want Stefan (Tyler Christopher) to come after him, so he’ll talk Hope into hiding him and keeping Rafe (Galen Gering) out of the loop.

Over with Kayla (Mary Beth Evans), she’ll consider the clues and realize Gabi’s been drugging Abigail. Kayla was already on the verge of this discovery when we last saw her, but something should help it all click into place. Days of Our Lives spoilers say Kayla will blast Gabi for her plot and demand some answers.

As for Chad, he’ll face Abigail’s wrath over her Bayview nightmare. Abby will feel deeply betrayed and furious by how all this has gone down. We should also point out that Days will be preempted on November 22 as well as November 23. The rest of the next two weeks’ episodes will air as usual.

It sounds like some good stuff’s coming up in Salem. We’ll give you updates as other Days details emerge. Stay tuned to DOOL and don’t forget to check CDL often for the latest Days of Our Lives spoilers, updates and news.