Days of Our Lives Spoilers Next 2 Weeks: Panicked Claire Knocks Out Ben – Sonny and Will Solve a Mystery – Titan Takedown Begins 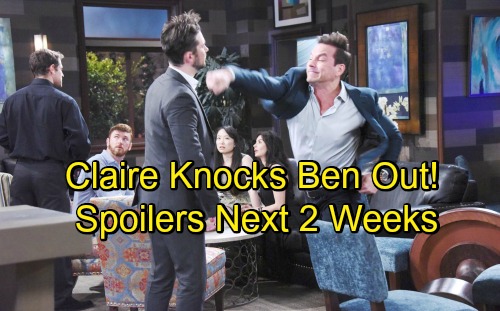 Days of Our Lives (DOOL) spoilers for the next two weeks tease that several Salemites will face shockers. The week of July 23-27 will definitely bring one for Chad (Billy Flynn). He’ll be stunned when Abigail (Marci Miller) admits she’s carrying Stefan’s (Tyler Christopher) baby.

Thanks to Stefan’s speech at the clinic on Monday, Abby will decide she should probably keep the kid. However, she may want to hear Chad’s (Billy Flynn) view first. Days spoilers say Chad will be livid over this devastating development. Deep down, Chad knows Abigail isn’t to blame for what “Gabby” did. That won’t stop him from lashing out at Abigail, so expect some painful moments.

Later, Chad will run into Stefan and start a fierce argument. It won’t take long for a physical fight to break out. When it comes to the DiMera brothers, violence always seems to be the answer! While Stefan and Chad throw punches, Sonny (Freddie Smith) will get some startling news. Will (Chandler Massey) recently received a troubling message, so he’ll want to get Sonny’s opinion on it.

Once Sonny sees the note Will found, he’ll suspect Leo (Greg Rikaart) might still be alive. Will should consider the option as well, but it seems DOOL has another explanation in mind. The next message could point Will and Sonny down a different path.

Afterward, Days of Our Lives spoilers say Ted (Gilles Marini) will confront Sonny. He’ll wonder if the secretive Kiriakis had anything to do with Leo’s vanishing act. It’d be weird for Ted to send cryptic notes AND grill Sonny. If he knows something, why wouldn’t he just confront Sonny with the truth? Will and Sonny may consider Ted as a potential message sender, but perhaps they need to keep digging.

The week of July 30-August 3 will bring the conclusion of this mystery. Days spoilers say Will and Sonny will discover who’s been sending the letters. Stefan seemed to know more than he was letting on during a chat with Ted, but there are other possible threats in Salem. It should be interesting to see how Sonny and Will handle this mess.

Elsewhere, Claire (Olivia Rose Keegan) will panic when she sees Ben (Robert Scott Wilson). Unlike Ciara (Victoria Konefal), Claire won’t be sure of the changes in him. When Ben gets too close, Claire will grab something and knock him right out.

Ben will face another nightmare when Hope (Kristian Alfonso) and Rafe (Galen Gering) corner him with guns. They’ll burst in on Ben and Ciara’s close moment, so it sounds like some chaotic scenes are ahead. Across town, Eve (Kassie DePaiva) and Brady (Eric Martsolf) will team up for a Titan takedown. They’ll vow to help Stefan with his efforts, but that could be a recipe for disaster.

Days of Our Lives fans won’t want to miss all the hot drama. We’ll give you updates as other details emerge. Stay tuned to DOOL and don’t forget to check CDL often for the latest Days of Our Lives spoilers, updates and news.