Days of Our Lives Spoilers: Rafe and Shawn Begin Investigation Against Hope – Believe She Planted Evidence Against Ben

BY hellodrdavis on September 18, 2018 | Comments: one comment
Related : Days of Our Lives, Soap Opera, Spoiler, Television 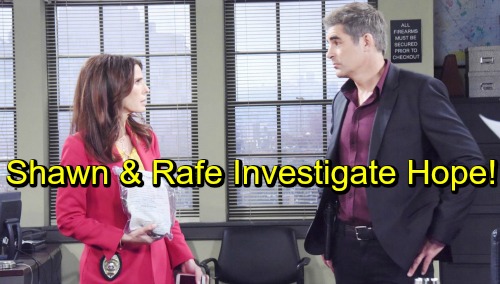 Days of Our Lives (DOOL) spoilers tease that Hope (Kristian Alfonso) will get herself into a bind. She claims to have found incriminating evidence that links Ben (Robert Scott Wilson) to the cabin fire that nearly took Ciara’s (Victoria Konefal) life. This evidence – a can of accelerant with Ben’s fingerprints on it – turned up when Hope went to the cabin alone, and after she swore to find something that would put Ben behind bars.

But there are some real problems with this new evidence. As Ben pointed out, Hope would like everyone to believe that the Salem PD, the arson investigator, and the crime scene unit all missed this important piece of evidence the multiple times they were at the scene. But it just seems a bit too convenient. Plus, fingerprints can be easily planted if someone knows what they are doing.

And Ben’s not the only one who has noticed the obvious issues with Hope’s new evidence. Rafe (Galen Gering) has expressed some skepticism about Hope’s discovery as well. He knows what Hope’s capable of, and while she’s a good cop, she’s also someone who would totally bend the rules if it meant keeping her daughter safe.

Shawn’s (Brandon Beemer) also been keeping a close eye on the case since Claire (Olivia Rose Keegan) is living with Ben, and he will also suspect that something fishy is up with Hope’s new evidence. Shawn will have the same “uh oh” feeling that Rafe has about Hope, especially since Hope was so driven to put Ben away.

That seems pretty drastic, and they probably won’t want to get Hope in hot water if they aren’t sure about the legitimacy of the evidence. So, they may choose to do a little investigating on their own to find out if the evidence is real or if Hope fabricated it…an unofficial investigation into the police commissioner’s actions.

What do you think Rafe and Shawn will find when they sleuth against Hope? Stay tuned to DOOL and don’t forget to check CDL often for the latest Days of Our Lives spoilers, updates, and news.