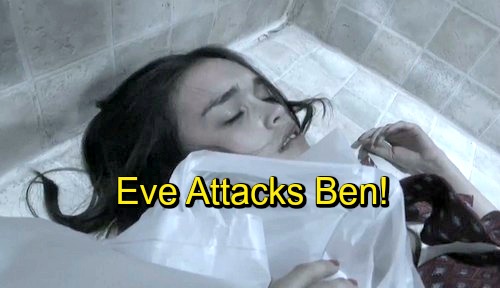 Days of Our Lives (DOOL) spoilers tease that a long-awaited encounter’s on the way. Ben’s (Robert Scott Wilson) been the talk of the town lately, but not too many Salemites have actually seen him just yet. Chad (Billy Flynn) hustled Ben out of Salem, which turned out to be a lucky break for Ciara (Victoria Konefal).

The cabin burned down, so Ben can’t hide out there anymore. He won’t have anywhere else to go, so he’ll end up sleeping on a park bench for a while. Ben will struggle to rebuild his life, but at least he’ll have Ciara in his corner. However, pretty much every other DOOL character will be against him. Ben’s caused a lot of pain and that’ll be hard for some people to get past.

Days fans know Eve (Kassie DePaiva) is one of those people. She has a good reason for hating Ben’s guts. Ben murdered Paige (True O’Brien) and as a result, changed her mom’s life forever. Eve will always have to carry that loss around. She must battle sorrow and regrets all the time.

Eve and Paige weren’t on great terms before the strangling. Paige still had some fresh wounds thanks to the news of Eve and JJ’s (Casey Moss) affair. Eve never had a chance to fully patch things up, so that made Paige’s death even tougher.

That’s why Eve will really let Ben have it when she stumbles across him. During the week of July 23-27, Days of Our Lives spoilers say Eve will look her daughter’s killer in the eyes. She’ll undoubtedly fly into a rage over everything she’s lost. Paige had her whole life ahead of her, so this was one of Ben’s most brutal killings.

Days of Our Lives spoilers reveal that Ben will offer a sincere apology. He’ll assure Eve that he never meant to hurt anyone. Ben was out of his mind and in desperate need of medication. He wouldn’t have resorted to such violence in the proper mental state.

Of course, Eve won’t care about any of that. She’ll be appalled that Ben’s allowed to roam free when Paige is still six feet under. On the bright side, letting out all this rage should be helpful. Eve’s anger has been building for far too long, so Ben should take whatever she dishes out.

Some startling scenes are coming up on the NBC soap. We’ll give you updates as other Days details emerge. Stay tuned to DOOL and don’t forget to check CDL often for the latest Days of Our Lives spoilers, updates and news.