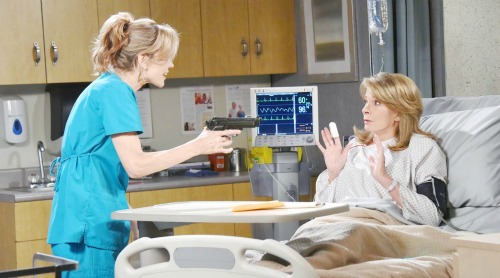 Days of Our Lives (DOOL) spoilers tease that Sami’s (Alison Sweeney) release will bring some shockers. She’ll score her freedom, so she’ll leave the police station and immediately head over to the DiMera mansion. You can probably guess who Sami will be looking for! She’ll hope to pull Kristen (Stacy Haiduk) out of whatever corner she’s hiding in and pry the truth out of her.

Sami’s a fierce character anyway, but that’s especially true when EJ’s (James Scott) involved. He was the love of her life, so she was absolutely devastated by his sudden death. Thankfully, EJ’s alive after all. DOOL fans know for sure, but Sami will still have questions. She’ll wonder if this info is accurate and if she learns it is, she’ll want to know where she can find her soul mate.

Only Kristen can provide answers, but Sami’s plan could hit another snag. Days of Our Lives spoilers say danger will be lurking at the DiMera residence. When Sami bursts in and tries to find Kristen, she’ll get caught in a risky situation. We also know Kristen will be on the loose with a gun again next week. Perhaps Kristen will hear Sami coming and pull a weapon on her enemy once more.

Regardless, Sami won’t get an exact location for EJ anytime soon. She’ll have to put some work into this if she wants to track EJ down. In the meantime, Days spoilers say Kristen will bolt from the mansion. Like Sami, Kristen will have unfinished business to take care of. She’ll ultimately end up in Marlena’s (Deidre Hall) room at the hospital.

Of course, that room now belongs to Hattie (Deidre Hall). As a result, Days of Our Lives spoilers say we’ll see confusion and chaos. On September 28, Kristen will arrive on the scene. It sounds like she’ll draw her gun and point it straight at “Marlena,” so we’ll definitely see some stunning moments.

You can bet Hattie will try to talk her way out of this. Will she reveal her true identity and beg to be spared? Kristen may think it’s all a ploy, but it won’t matter in the end. During the week of October 1-5, Days of Our Lives spoilers say Roman (Josh Taylor) will step up to stop this violent attack. Too bad the gun will go off in the struggle!

Will someone get shot by a stray bullet or will Days skip another bloody mess? We’ll give you updates as other DOOL news comes in. Stay tuned to the NBC soap and don’t forget to check CDL often for the latest Days of Our Lives spoilers, updates and news.