Days of Our Lives Spoilers: Sarah’s Fury Explodes, Rex Dumped Over Betrayal – Eric Next in Line for Sarah’s Love 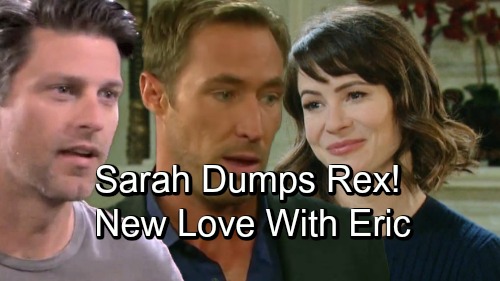 Days of Our Lives (DOOL) spoilers tease that Sarah (Linsey Godfrey) is in for a rude awakening. She’s thrilled to be marrying Rex (Kyle Lowder), but her bridal bubble’s about to burst. Sarah won’t be walking down the aisle anytime soon. Her engagement party will turn into a total disaster, so it won’t be long until they break things off.

Thanks to Chloe (Nadia Bjorlin), Sarah will find out Rex cheated on her. He had a steamy night with Mimi (Farah Fath), which resulted in the birth of a little girl. Of course, that’s the same one Bonnie’s (Judi Evans) trying to pass off as her kid with Lucas (Bryan Dattilo).

All these secrets will explode after Chloe presents DNA proof. Days of Our Lives spoilers say Sarah will be absolutely appalled. She’ll wonder how Rex could do this to her. He’ll undoubtedly have a thousand excuses, but none of them will be good enough for Sarah.

Rex’s hookup with Mimi will seal his fate, especially since there’s a child involved. For Sarah, Rex’s daughter would be a permanent reminder of his betrayal. She might be able to get past it, but she won’t stand by him to find out. Instead, Days of Our Lives spoilers say Sarah will unleash her wrath and dump Rex. She’ll decide to move on since Rex is always going to be pulled toward Mimi.

DOOL fans can expect some low moments for Sarah. She’ll be devastated, but Maggie (Suzanne Rogers) will offer support. It seems likely that Sarah will lean on Eric (Greg Vaughan), too. They can be sympathetic buddies since Eric’s also going through a rough time.

Sarah and Eric will eventually have something else to bond over. Days spoilers say they’ll come together with a goal in mind. Nicole (Arianne Zucker) wanted Eric to raise Holly, but it’s not quite that simple. Maggie and Chloe will have their hats in the ring, so Eric will have to fight for Nicole’s daughter. He’ll want to do it as peacefully as possible, so Sarah may pitch in with that.

This new love story will take a while to play out, but a soapy slow-burn romance is nice sometimes. Eric and Sarah’s connection will develop naturally, so that should give us a pairing to truly root for. We’ll give you updates as other Days news comes in. Stay tuned to DOOL and don’t forget to check CDL often for the latest Days of Our Lives spoilers, updates and news.