Days of Our Lives Spoilers: Steve Arrested For Espionage – Leaves Kayla Behind and Lots of Questions Unanswered – Final Airdate 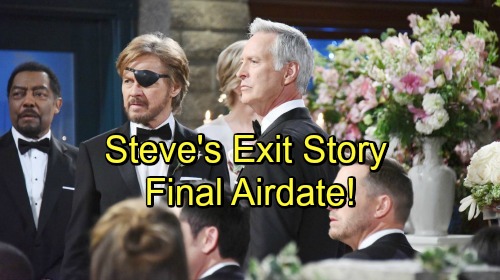 Days of Our Lives (DOOL) spoilers tease that Steve (Stephen Nichols) will soon meet a terrible fate. He’ll be arrested for espionage. Unfortunately, the action will all happen off-screen, so viewers won’t see how it all goes down. Later, Roman (Josh Taylor) will break the devastating news to Kayla (Mary Beth Evans) on screen.

As many viewers are aware, Stephen Nichols left Days after he and TPTB didn’t reach a contractual agreement. From all accounts, the departure happened fast, resulting in a hasty write-out for the beloved Steve Johnson. Now there is buzz that Stephen is filming at General Hospital in his old and beloved role as Stefan Cassadine!

It’s a departure that, from a storyline perspective, has many viewers scratching their heads. Steve and Kayla have been involved in a major story lately, with Kayla keeping a big secret from her husband. Unbeknownst to Steve, Kayla did some bidding for Stefan (Tyler Christopher) in exchange for the bionic eye that gave Steve his sight back.

Of course, Steve hates Stefan and didn’t want the eye if Stefan was involved. The fact that Kayla went behind Steve’s back to get the eye for him is huge, and Kayla’s been struggling lately with whether she should tell Steve the truth. Now Stefan’s threatening to turn off Steve’s bionic eye if Kayla doesn’t keep Stefan up to date on Abigail’s (Marci Miller) pregnancy. It’s a real mess.

But will the mess get resolved, now that Steve is going to be arrested off-screen? Will Kayla get a chance to tell Steve what she’s done, and will viewers get to see Steve’s reaction and the resolution of this conflict?

Also, what will happen with Steve’s bionic eye now? Stefan will still presumably still have the power to turn the eye off, so will Kayla still have to do Stefan’s bidding going forward? Viewers were counting on an ultimate Steve vs. Stefan confrontation and resolution of the issues surrounding Steve’s eyesight.

How Days will handle the open story and loose ends remains to be seen, but one thing is for sure. Stephen Nichols will certainly be missed! Steve’s last airdate is August 31, when he’ll be shown supporting John (Drake Hogestyn) as John awaits word on Marlena’s (Deidre Hall) condition.

Will you miss Steve? Stay tuned to DOOL and don’t forget to check CDL often for the latest Days of Our Lives spoilers, updates, and news.