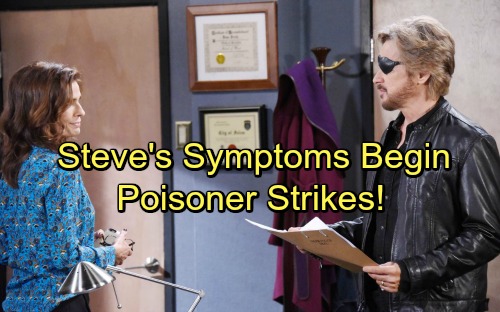 Days of Our Lives (DOOL) spoilers tease that a big story will kick off for Steve (Stephen Nichols) on this week’s new Days episodes, January 8-12. He’ll suddenly feel like the room’s spinning around him. Steve will struggle to keep his balance as this dizzy spell gets out of hand. Once the floor stops swaying and Steve catches his breath, he’ll wonder what’s happening to him.

Steve will do his best to brush any concerns aside. He’ll probably think he’s just coming down with something. Steve will hope this was just a one-time deal. Of course, DOOL fans know that it won’t be. This is the first of many peculiar symptoms.

Steve’s vision will soon grow blurry on a regular basis. He’ll also suffer from severe headaches in the weeks ahead. Unfortunately, Steve will choose to tough it out at first. He won’t want to alarm Kayla (Mary Beth Evans), so he’ll stay tight-lipped.

Days of Our Lives spoilers say Kayla will notice Steve isn’t quite himself. She’ll likely question him about what’s up. Nevertheless, it may take a near-death experience to change anything. Steve doesn’t like to ask for help with stuff like this. He tends to think he’s invincible, but he’ll desperately need medical attention.

This isn’t just some random illness. Someone will pump Steve full of a deadly poison. He could be in real trouble if he lets this go on too long. Days of Our Lives spoilers reveal that the culprit will be a real shocker. It’s not a character anyone would expect.

Who would do this to Steve and why? It’s possible that the poisoning will be inadvertent. That would open the door for plenty of surprising candidates. If Steve’s accidentally poisoned from a food, drink or something he puts on his skin, the person who’s consistently giving it to him would still technically be to blame.

However, Days may choose to really go for it and make this a vicious threat. Maybe someone in Salem will turn to the dark side for a while. Any villainous characters wouldn’t be surprising, so it’ll have to be somebody with a decent heart.

Is one Days character about to take a sinister turn? We’ll give you updates as other DOOL news comes in. Stick with the NBC soap and don’t forget to check CDL often for the latest Days of Our Lives spoilers, updates and news.