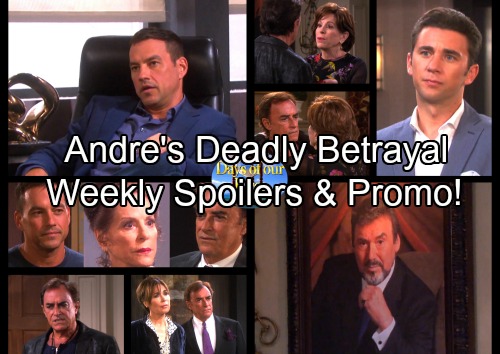 Days of Our Lives (DOOL) spoilers for the week of January 8-12 tease that Andre (Thaao Penghlis) and Vivian (Louise Sorel) will discuss their secret alliance. Viv will think their partnership is working out beautifully. None of the other DiMera family members suspect a thing! Chad (Billy Flynn), Abigail (Marci Miller) and Kate (Lauren Koslow) all assume Andre was blindsided like they were.

However, Andre has actually been working behind the scenes for quite a while. He denied any involvement in the sabotage, but that wasn’t the whole truth. It seems Andre knew what was up and played a role in the chaos.

Theo (Kyler Pettis) nearly died and it all started with that damage. The rest of the DiMera clan wouldn’t be happy if they knew this tidbit. Andre’s apparently been lying about a lot lately, but one thing appears to be true. He has deep feelings for Kate, so she’ll eventually agree to move forward as a real couple.

Naturally, Andre’s DOOL secret could throw off that plan. All will be revealed sooner or later, but Andre will face close calls for now. Days of Our Lives spoilers say Kate will walk in on Andre and Vivian’s latest meeting. She’ll ask what they’re up to, but Andre will manage to throw Kate off track.

You might be wondering why Andre’s doing all this. What’s his motive for taking such huge risks and standing against his own family? It all comes down to power. Andre is the eldest son, so he hasn’t enjoyed watching Chad act like the top dog.

Although Andre’s fond of Kate, he probably doesn’t like it when she tries to take charge either. Andre believes it’s his time to shine and Vivian has promised to make that happen. Days spoilers state that Vivian will have a role near the top for Andre, but he may decide that’s not enough at some point.

Andre has been helping Stefan (Tyler Christopher) and Vivian, but this is certainly a dangerous arrangement. Days of Our Lives spoilers say someone will get double-crossed before this storyline concludes. Stefan will let Vivian know that he’s loving all the family stuff. Despite the extreme outrage, Stefan will see the potential to bond with his new siblings and their spouses.

It looks like Stefan will want to settle down with the fam, but Andre and Vivian could stir up separate trouble. No one’s agenda is lining up! We’ll give you updates as other Days news comes in. Stay tuned to DOOL and don’t forget to check CDL often for the latest Days of Our Lives spoilers, updates and news.