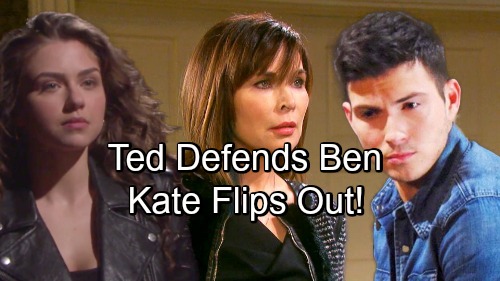 Days of Our Lives (DOOL) spoilers tease that Ciara (Victoria Konefal) will realize she can’t help Ben (Robert Scott Wilson) alone. If she wants to get him off the hook for the fire, she’ll need a top-notch lawyer. As luck would have it, there’s an excellent one who just wrapped up two cases. Of course, we’re talking about the infamous Ted Laurent (Gilles Marini).

In just a short time, Ted’s already made a name for himself as a real shark. He certainly put Justin (Wally Kurth) to shame at that custody hearing. Ted knows how to dig up every morsel of dirt and poke holes in the law. He managed to score a victory for Theresa (Jen Lilley) and probably would’ve won Leo’s (Greg Rikaart) case if he’d had the chance.

Days spoilers say Ciara will hire Ted next week. She should have some money from the modeling contract she scored, so that could be enough to cover Ted’s hefty fees. Ciara will clean out all her savings if she has to. She’ll do whatever it takes to get the best defense attorney for Ben.

Naturally, Ciara and Ted’s agreement will stir up trouble. Days of Our Lives spoilers say Rafe (Galen Gering) and Hope (Kristian Alfonso) will be beyond frustrated. They just want to put Ben away, but Ciara will make every effort to prevent that.

However, Days will also deliver backlash for Ted. He tends to be hated by the people he goes up against, so criticism is usually no big deal. Things could be different once it causes personal drama. DOOL fans know Kate (Lauren Koslow) and Ted’s romance has been blooming lately. This will mark their first major bump in the road.

Ben tormented Chad’s (Billy Flynn) wife, Abigail (Marci Miller), and nearly murdered Will (Chandler Massey). Kate will think Ted has no business defending a monster like that. She won’t care about Ben’s claims of being a changed man.

Kate will probably push Ted to drop Ben as a client, but it’s doubtful he’ll budge on this. Ted’s the kind of guy who honors his commitments, especially when the case is so winnable. There’s no real evidence against Ben, so this should be a slam dunk!

It sounds like the buffoons at the Salem PD are going down in a big way. We’ll give you updates as other Days of Our Lives news comes in. Stay tuned to DOOL and don’t forget to check CDL often for the latest Days of Our Lives spoilers, updates and news.