Days of Our Lives Spoilers: Thursday, June 28 – Kayla Gets Her Wish, But Lies to Steve – Leo’s Desperate Move – Rafe’s Shocker 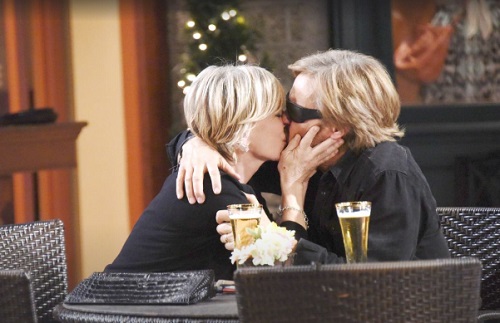 Days of Our Lives (DOOL) spoilers for Thursday, June 28, tease that Kayla (Mary Beth Evans) will come through for Stefan (Tyler Christopher). She told him her suspicions about Kate (Lauren Koslow) and Ted (Gilles Marini), but that wasn’t good enough for the devious DiMera. Stefan needs proof that Kate arranged Leo’s (Greg Rikaart) lawsuit and he’s about to get it.

DOOL fans can expect Kayla to send Stefan the incriminating photos. He’ll be pleased that she scored pics of Kate and Leo together. Stefan would probably like to have even more evidence, but he won’t be too greedy. Kayla’s done her part, so she deserves a reward.

Days of Our Lives spoilers say Kayla will get some fantastic news. Stefan will put things in motion regarding Steve’s (Stephen Nichols) bionic eye. Later, Kayla will give Steve updates – minus a few details! Kayla will fib about how she pulled this off, so Steve will remain in the dark on her dirty deal.

Elsewhere, Leo will feel the walls closing in. He’ll realize Kate’s bailing on him, so this lawsuit’s about to fall apart. Days spoilers state that Leo will try to salvage what’s left of his leverage. He’ll go to Sonny (Freddie Smith) and admit this scheme was Vivian’s (Louise Sorel) brainchild. Leo will hope he can still get that Kiriakis money, so he’ll drop a marriage proposal on Sonny by the end of the week.

Other Days spoilers say Abigail (Marci Miller) will be in shock over her discovery. She just took a pregnancy test and revealed the unfortunate results to Gabi (Camila Banus). Abigail is indeed carrying one DiMera brother’s baby. Is this kid Chad’s (Billy Flynn) or Stefan’s? Gabi will urge Abigail to find out as soon as possible.

However, Gabi’s sudden kindness is a bit bizarre. Abigail needs to be very careful when it comes to her bitter bestie! Gabi’s more vengeful than ever, so she could easily turn this baby bombshell into ammo.

Meanwhile, Hope (Kristian Alfonso) will share her stunning suspicions with Rafe (Galen Gering). She believes Ciara’s (Victoria Konefal) with Ben (Robert Scott Wilson), so she’ll be an even bigger mess than before! Their search will definitely rev up thanks to Hope’s findings.

Hope’s right about who her daughter’s with, but Ciara’s not in danger…yet. After Ben goes off his meds next week, that’ll change in a big way. We’ll keep you posted as other Days of Our Lives details emerge. Stay tuned to DOOL and don’t forget to check CDL often for the latest Days of Our Lives spoilers, updates and news.

This week on #DAYS: Theresa sues Brady for custody, and Abby is afraid she’s pregnant with Stefan’s baby. pic.twitter.com/yXmUxFfRpc