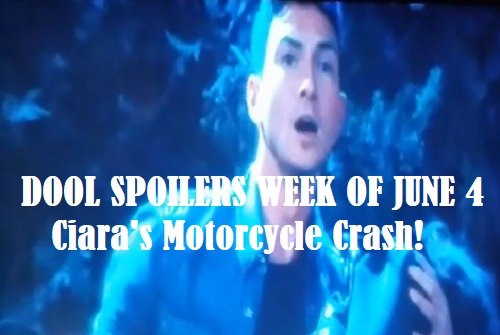 Days of Our Lives (DOOL) spoilers for the week of June 4-8 tease that we’ll see some heated moments on the NBC soap. Ben (Robert Scott Wilson) assured Marlena (Deidre Hall) that he wants to be a better man. She’s not going to block Ben’s release, so he’ll be free to head back to Salem soon.

Naturally, the news will make serious waves around town. Kate (Lauren Koslow) will be livid when she hears Ben’s getting out of the sanitarium. She won’t understand how this serial killer could be allowed to roam around and potentially commit more crimes. Kate won’t buy that a guy like Ben could ever turn from his wicked ways.

Nevertheless, Ben intends to make amends if possible. He’ll run into some trouble as he tries to achieve that goal. Days spoilers say Ben will hope to chat with Will (Chandler Massey), but he’ll find Chad (Billy Flynn) instead. Their encounter will bring a fierce outburst from tormented Abigail’s (Marci Miller) husband!

Chad will rip into Ben, who’ll reiterate that he’s changed and wants to redeem himself. Of course, Chad won’t believe a word out of Ben’s mouth. Days of Our Lives spoilers state that he’ll shove Ben and insist that no one wants him there. Chad will urge Salem’s worst enemy to scram and leave the people he’s hurt alone.

After Chad’s meltdown, Ben will head off to mope alone. Earning any kind of trust or forgiveness is going to be tough. However, a stunning accident could help Ben out a tad. Days of Our Lives spoilers say he’s about to cross paths with an injured Ciara (Victoria Konefal).

Tripp (Lucas Adams) and Claire (Olivia Rose Keegan) will nearly have sex, but they’ll end up stopping at the last second. Alas, Ciara will still catch them nude on the couch. She’ll lash out at them both before jumping on her motorcycle.

DOOL spoilers say Ciara will be heartbroken and furious, so won’t exactly obey the rules of the road. After a frightening crash, Ciara will be knocked out cold. Fortunately, Ben will stumble across Ciara’s unconscious body. He’ll scoop her up and take her to a secluded hideaway for some first aid.

Ciara’s in for a shock when she wakes up! We’ll give you updates as other Days details emerge. Stay tuned to DOOL and don’t forget to check CDL often for the latest Days of Our Lives spoilers, updates and news.