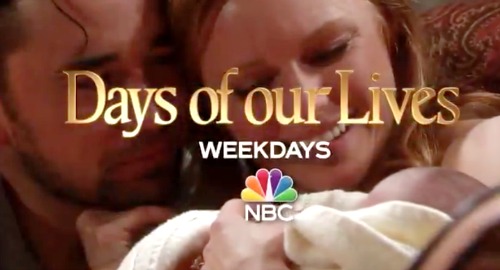 Days of Our Lives (DOOL) spoilers for the week of November 12-16 tease that some bold moves are on the way. First, Claire (Olivia Rose Keegan) will take steps to protect Tripp (Lucas Adams). She won’t want anyone to find out he’s behind the planted evidence, so she’ll track down Wyatt (Scott Shilstone) and convince him to take the blame.

Wyatt will undoubtedly get something sweet out of the deal, but it won’t be worth it in the end. Once Ben (Robert Scott Wilson) figures out what’s up, he’ll confront Wyatt and demand a confession. Wyatt won’t dare to cross this former serial killer. He’ll come clean and squeal on Claire, so Ben will end up fuming.

Afterward, Ben will drop quite a bomb on Ciara (Victoria Konefal). He’ll let her know that Tripp set him up, so he’ll hope this proves she made the wrong choice. Meanwhile, Sarah (Linsey Godfrey) will mull over her wrong choice as well. She’ll sulk over Rex (Kyle Lowder) and how it all went so horribly wrong.

Days of Our Lives spoilers say Rex will beg for another chance. He’ll even propose again with the ring Sarah returned, but she’ll shut down the idea. Sarah will insist that they’re through for good. Afterward, Sarah and Eric (Greg Vaughan) will spend some time together. They’ll form a solid connection, so that’ll be something they can build on in the coming months.

Other Days spoilers state that Abigail (Marci Miller) will give birth at the Horton cabin. Chad (Billy Flynn) will deliver the baby and rejoice over the family addition –  see the new weekly promo below. Despite the kidnapping ordeal and Abigail’s marriage to Stefan (Tyler Christopher), “Chabby” will enjoy some sweet moments. Sadly, it’ll all go out the window when Chad hands over the baby in exchange for what he wants.

Stefan will agree to sign some papers and have Abigail committed. He’ll get little Charlotte in return, so Jennifer (Melissa Reeves) will be furious. Days of Our Lives spoilers say Stefan and Jenn will have quite a war on this week’s new Days episodes, November 12-16. She’ll make it clear that she won’t stand by and let him ruin her new granddaughter’s life.

Abigail will be equally livid over Chad’s betrayal. Her anger will intensify when Gabi (Camila Banus) shows up to taunt her at the sanitarium. Over with Lucas (Bryan Dattilo), he’ll let Chloe (Nadia Bjorlin) know he loves her. Nevertheless, it’ll be time for Lucas to leave town. After all the baby drama, Lucas will just want to get out of Salem.

Finally, DOOL spoilers say Paul (Christopher Sean) will get stunning news. Brady’s (Eric Martsolf) admission will tip him off to trouble, so Paul will demand answers from Will (Chandler Massey). He’ll want to know the truth about Will’s feelings for Sonny (Freddie Smith).

It looks like some exciting episodes are coming up. We’ll give you updates as other Days news emerges. Stay tuned to DOOL and don’t forget to check CDL often for the latest Days of Our Lives spoilers, updates and news.

Abigail goes into labor in a remote cabin with only Chad there to help. Watch #DAYS, weekdays on NBC. pic.twitter.com/tgWUMbCLz0