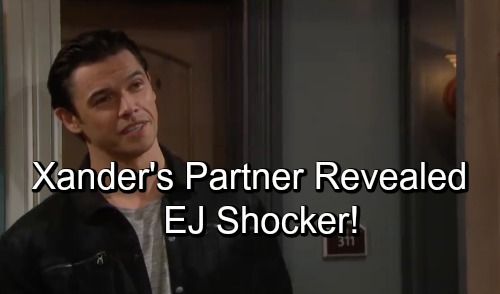 Days of Our Lives (DOOL) spoilers tease that Eric (Greg Vaughan) will hit some snags on his latest quest. He’ll do whatever it takes to track Nicole (Arianne Zucker) down, but the journey won’t be easy. Maggie’s (Suzanne Rogers) deception will cause Eric’s first hurdle, but it won’t be long until she comes clean. Next week, Maggie will admit that she knows Nicole’s true location.

Naturally, Eric will be thrilled over the news. He’ll just hope it’s not too late to recapture the magic and get the happy ending they deserve. Unfortunately, “Ericole” fans won’t get the fairytale they’re hoping for. DOOL viewers will see a steamy kiss and maybe a bit more, but that’ll be the extent of this reunion.

Days of Our Lives spoilers say Nicole isn’t sticking around for long. Eric and Nicole just aren’t meant to be – right now anyway. These two have a way of finding their way back to each other, so who knows what might happen down the road? If Zucker ever decides to make a permanent return, Days will likely give “Ericole” another shot.

However, we should focus on the heartbreak of Nicole’s current stint. It’s possible Nicole’s already moved on, but her lip lock with Eric will suggest otherwise. Then again, Eric might just plant the kiss. Nicole could enjoy it, but explain her complicated situation afterward.

There’s another way Days could take this though. Since Brady presumably won’t blab about Deimos’ (Vincent Irizarry) murder, Nicole might be open to the idea of reuniting with Eric. That’s when Xander (Paul Telfer) could come back on the scene and make a big splash. He could be the real reason Eric can’t have what he wants.

It turns out Xander won’t be working alone. During the week of October 8-12, Xander’s shocking partner in crime will be revealed. Who’s Xander in cahoots with? There’s no official word on that yet, but EJ (last played by James Scott) would be an intriguing option. He could at least be connected.

Based on DOOL’s fall promo, we know there’ll be an explosion. We also know EJ will be covered in bandages at the hospital. Earlier fall spoilers hinted that Eric’s story would collide with Sami’s (Alison Sweeney) search for EJ. When you add all that up, it makes sense that EJ fits in here somehow.

Of course, Kristen could technically be the partner in crime. That would still tie EJ in with this exciting plot. Days of Our Lives spoilers say some hot drama’s ahead, so don’t miss a second of the action. We’ll give you updates as other details and comes in. Stay tuned to DOOL and don’t forget to check CDL often for the latest Days of Our Lives spoilers, updates and news.