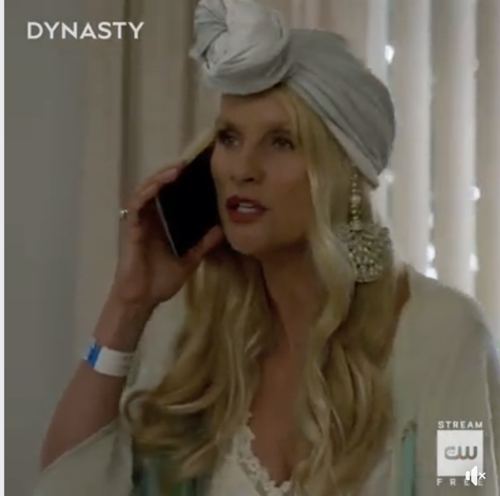 Tonight on the CW Dynasty the reboot of the 1980 series that followed the Carrington family airs with an all-new Friday, November 16, 2018, episode and we have your Dynasty recap below.  On tonight’s Dynasty season 2 episode 6 “That Witch,” as per the CW synopsis, “Fallon fights to prove to Culhane’s family, and to herself, that Culhane is her one and only, while hoping to put Liam in the rear-view. Blake and Cristal struggle to keep their courtship alive as a paranoid Alexis derails their holiday plans.”

The kitchen is gearing up for the holiday festivities and Anders is making sure that everything is on track. The turkey baster is missing, Sam took it to transfer Sam’s sperm to Kirby so she can carry his child for Steven. Anders gets wind of their plans and tells Sam to keep the turkey baster away from Kirby.

Fallon tells Culhane that they should have his sister and mother over for Thanksgiving, but he doesn’t think it is a good idea since it is the first Thanksgiving without his dad, and its a sensitive topic. Fallon suggests they go there then, but Culhane doesn’t want to. In fact, Culhane admits to Fallon that he didn’t tell his mother that they are engaged. Fallon wants to tell her right away.

Blake made breakfast for Cristal, she seals it with a kiss. Blake tells her that he wants to have sex with her, but first, he wants to know everything about her. Anders interrupts, Dr. Dixon is there to do his physical for the insurance.

Alexis is directing one of the maids when Fallon walks in. Alexis tells her that the physic told her that she and Blake were meant to be together and that Blake was going to die. Fallon doesn’t believe it and tells her that Blake is happy with replacement Cristal.

Cristal is packing when she finds an envelope addressed to her for severance pay and it is for $500,000.00.

Fallon drops by the office to drop off keys, Liam is there and he wants to talk about their make-out session at their divorce party. He tells her to try to go the whole weekend and not think about that kiss, and if she can’t, she knows that she has to be with him and not with Culhane. Liam says he is going on a buying trip on Monday and either she meets him at the airport or this is goodbye.

Culhane and Fallon go to his visit his mother and tell her they are engaged. Fallon invites her to Thanksgiving and she says she can’t because she always spend the holiday serving her church.

Anders is speaking to Sam about the baby, he doesn’t like the whole idea. Anders tells him that he can’t bear the thought of them making a mistake that is going to run the rest of their lives.

Alexis is wondering why she sees Blake’s packed luggage in the entrance way.

Sam tells Fallon about the idea of having Kirby carry his child. Fallon thinks Kirby is nuts he should not do it. Sam mentions the kiss with Liam, Fallon says it was confusing but she is with Culhane.

Blake and Cristal try to get away for Thanksgiving but the plane is having mechanical issues and there is a storm coming, little do they know it is Alexis that cooked the whole thing up.

Fallon wants to make a seating change for dinner, she tells Anders that Culhane’s mother and sister are coming.

Culhane and his family arrive, Fallon tells them it gives them a chance to be a big happy family. Culhane is wondering why his family consented to go to dinner, Fallon says that she bribed the pastor to fix the roof of the church.

Cristal is on the phone and asking why her severance is so big. Alexis overhears the conversation.

Kirby asks Anders if he spoke to Sam, he says yes and he is not for the plan.

Alexis stops Blake at the front door and tells him that Cristal is trying to kill him, while Kirby comes out of another shouting at Anders while Culhane’s family looks on in shock. Culhane’s mother goes to leave when the pastor arrives with some of the congregation that Fallon has invited to dinner. Kirby wants out of the house as well, but the pastor advises that there is a tornado warning and nobody should leave.

Kirby is drunk, he tells Sam not to tell her dad because he is just going to judge her again.

Alexis checks on Fallon and she tells her she doesn’t need her mothering, she has pills that can do a better job.

Blake and Cristal enjoy some wine in the wine cellar.

Sam tells Anders that he is right, Kirby is insane, she was showing the church kids how to do tequila shots and he is worried that she is insane.

A tornado warning goes off, Anders tells everyone to follow the butler, they need to go into the cellar. Fallon and Alexis are the first down and find Cristal and Blake half naked.

Culhane and Fallon are having an argument about each other’s mother, she leaves the cellar and goes upstairs. Fallon tells him that she saw him with a woman at the divorce party and she wants to know who it is. All of a sudden a window smashes and Fallon is hit on the head and passes out.

Fallon is in a dream, she is Dorothy, her father is dead, it is a scene from Wizard of Oz and her mother is a good witch, Cristal a bad witch. Liam is the Scarecrow, Culhane is the Tin Man, Sam is the Lion. Culhane’s mom is the Wizard. Fallon just wants to go him, Culhane’s mom says end her engagement with her son and she can go home. The real wizard is actually Fallon, there are two Fallon’s and they kiss. All of a sudden, Fallon wakes up. She tells Culhane she is confused.

Anders calls a medic for Fallon.

Fallon is in bed, Culhane’s mom comes in and tells her not to break her son’s heart because she can be terrible.

Alexis goes to see Blake and tells him that the psychic told her they belong together, he tells her to get it together and stop acting like she is crazy.

Anders tells Kirby that he has been treating her terribly, he will support her in anything she decides and he wants her to move in, he misses her.

Alexis makes up with Fallon who tells her that sometimes she can’t figure out if she is a good witch or bad witch. Fallon then writes a cheque out to Alexis and tells her that she is still her mom.

Cristal figures out that Blake bought the clinic and he is the reason why she lost her job. Blake tells her that he has very bad habits, he always gets what he wants. Cristal tells him that he is incredibly sexy. Blake gets down on one knee and asks Cristal to marry him.

Fallon calls Liam and tells him that she has been thinking about him a lot, but the other day in her office was goodbye. What she has with Culhane is real, they are over.

Alexis pays off her son, he tells her she wasn’t a bad mother after all and he leaves her with Matthew with a note, the note reads that his mother is Claudia and she is crazy.