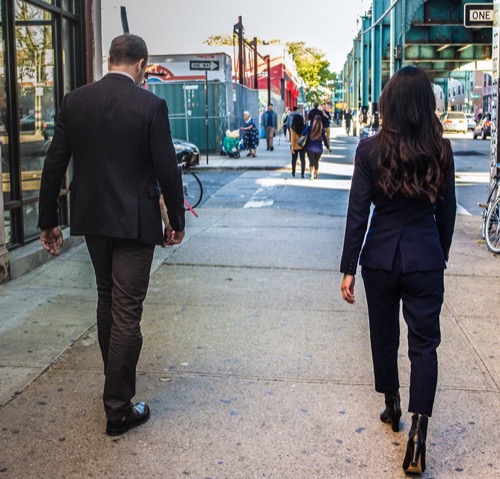 Tonight the CBS series Elementary airs with an all-new Monday, June 11, 2018, season 6 episode 8 and we have your Elementary recap below. On tonight’s episode called, “Sand Trap” as per the CBS synopsis, “Holmes and Watson’s search for the killer of a woman found encased in cement takes them inside the clean technology industry. Also, Watson takes a giant leap forward regarding her interest in adoption.”

Holmes has returned home. Watson hugs him. He lets slip that he worked a case while Watson keeps looking towards the other room. Holmes wants to know why. She must have someone in the house. Maybe a lover? Holmes asks. Watson introduces him to a pregnant young Asian woman. She plans to adopt her baby. Watson tells him they will talk later as she whisks the girl upstairs.

On a job site, a man cuts into concrete. He pulls up a large piece. His co-worker is disgusted. There is a body in there.

Holmes and Watson talk. She has been tending to watching and tracking Michael. There is no leads. He seems to have disappeared. Watson mentions she was going to tell him about the baby but he was having issues with his PCS. Marcus calls. They head to the morgue to look at the bottom of a Jane Doe. She was strangled and must have been buried 2 days ago. Holmes notices a smart bracelet. There is an RF chip inside. Employees use these to gain access to certain areas.

They track down Jane Doe’s employer and discover her name is Lauren. They speak to him. Watson asks him why he was overheard on a convention room floor threatening to end her. He explains that she has failed to complete a two-year project. He was angry. He wanted to end her career.

At the office, Holmes notices a red paint on the sweatshirt she was wearing, a red paint that can only be found at 3 properties. They track down the house. The man inside says he doesn’t know a Lauren. Marcus asks him to come out and open his garage. He attempts to make a run for it. Marcus goes after him. Watson and Holmes break into the garage as they talk. Watson doesn’t expect him to co-parent. He tells her he is willing to make changes that will make her happy. They find a machine in the garage, the same machine Lauren was supposed to be creating for her boss. A machine, called Merma, that cleans the bottom of the ocean. They bring him in.

He admits Lauren reached out to him to help build Merma. He is an engineer out of work. Lauren’s company shared their tech with the market. It made Lauren mad because she was supposed to get points for her project so she decided to build it behind her bosses back and beat him to market.

Watson has breakfast with the mother of the baby she might possibly adopt. She heads home to see Holmes who has learned that Lauren was stealing tech ideas from others. Maybe she had enemies? Holmes has also found video footage with Lauren at the Hudson River where a security guard keeps telling her she needs to leave. There was construction going on. Holmes shows her some water tests that show the construction company could be dumping waste.

Watson heads to city hall. She asks for records recording the land and the construction on the river. A man that works there discloses to her that it was taken out by a construction company who is notorious for demanding permits fast. He had a gun put to his head. Holmes calls her. He thinks he knows what the company was up to. They have abandoned the site but sand was siphoned out of the river and in large amounts that has caused erosion.

Watson and Holmes meet with Gregson and Marcus to tell them their findings. Holmes has traced Topaz Construction ( a shell company) to one man, a representative of the Sand Mafia who lives in New York. Holmes knows where he eats every day. They head to the restaurant. The man assures them that he had a permit to extract the sand.

Later, Holmes comes home with good news. His doctor says his recovery is going well after he took time off. Watson shares that their suspect has shared the files showing he was allowed to extract the sand. Holmes goes into the kitchen to make himself some dinner. The pregnant teen, Kelsey, is in there. He tells her Watson would be a great mother and if his background worries her he would be willing to leave to ensure Watson gets what she wants. Marcus calls. Holmes heads to a crime scene. The man from city hall has been murdered and in the same style of killing their suspect is known for.

After much thought, Holmes and Watson realize that Lauren’s boss was the one who killed her. He strangled her with his seat belt in his car. He was angry she had made progress and he was also happy she was the target of the Sand Mafia and not him. They are in the middle of swabbing his car. They got a search warrant and they are sure they will come up with DNA.

Kelsey tells Watson she has decided to keep the baby. That night, Holmes and Watson watch TV together. Watson is sad.