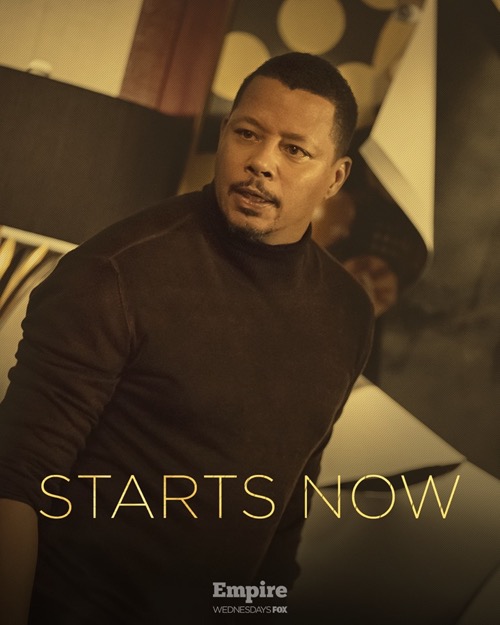 Tonight on FOX their blockbuster drama Empire airs with an all-new Wednesday, November 28, 2018, episode and we have your Empire recap below. On tonight’s Empire season 5 episode 8 called, “Master of What is Mine Own,” as per the FOX synopsis, “The cost of running Lyon Family Management starts to put pressure on Cookie and Lucious’ relationship. When Kingsley pulls a power move of his own that has major financial repercussions for Lucious, Cookie thinks back to their early struggles. Kai (guest star Toby Onwumere) becomes upset when Jamal announces their engagement on live TV and Tiana hits a crossroad with Hakeem, who refuses to set aside his beef with Blake. Meanwhile, Candace becomes vindictive after feeling betrayed by Cookie and Giselle uncovers a key to her future.”

Lucious is washing the blood from his hands when Cookie comes in. She asks him what he did.

Present Day – Cookie keeps trying to call her sister since she called the police on Franklin and her sister won’t call him back. Lucious consoles her and then turns the TV on. Jamal is on performing and giving an interview with ET. He talks about his new music, his engagement. They call Kai to the forefront. He looks uncomfortable. Meanwhile, Lucious shows Cookie a picture of all the jewelry he plans to buy her.

Past – Lucious gives Cookie a Derek Adams painting. She is thrilled.

Present Day – Jeff announces to his Empire employees that they are pulling all Lyon family songs and more from their platforms. One of the employees speak. He fires him on the spot.

Cookie and Luscious work with Hakeem and two other male talents they have for their label. She demands they leave their attitudes at the door.

Becky visits Cookie and Lucious and tells them what Jeff has done. The block will stop all of the Lyons’ residuals.

Maya comes to see Cookie. She has broken up with her boyfriend and needs a place to stay. Cookie is reluctant and irritated but tells her yes.

Lucious shows up to see Jeff and confront him. Jeff plays coy about his intentions but when Lucious gets assertive he admits that he plans to wipe him away from an entire generation.

Lucious returns home to tell Thirsty and Andre. He wants to figure out where Jeff is making up the money he is losing on him. He tells them to keep this quiet. Cookie has enough going on. After he leaves his office, he runs into Cookie. He admits he saw Jeff but it was a fact-finding mission. She tells him they need to focus on their future.

Past Day – Cookie and Lucious are fighting over their losses. She asks him if he blames her for losing Empire. Before he can answer, she heads out of the house for a drink. She meets a charming man. She tells him she is married but he is persistent. Later, he catches her in the elevator alone. It comes to a stop. They are stuck. He panics. She helps him through, telling him to breathe. They get to talking. She tells him her name before the elevator starts again and they part ways.

Kai and Jamal are at home. Kai is angry that he his life was on TV today. He is a serious journalist. Jamal is insulted. Kai apologizes.

Lucious comes home to find Cookie working at the table. She is frustrated. He tells her they should mortgage the house to cover their music venture.

Becky talks to Gisele. She doesn’t understand what is going on with Jeff. Vaulting the Lyons music makes no sense. Gisele tells her to sit tight. Becky is ready to explode. They need to make some moves.

Cookie goes to Candace’s and sees her leaving. She confronts her. Candace doesn’t want to talk. She cannot believe she did this to her and Franklin. He was just out of control. Cookie points out that he could have killed her. Candace compares his troubles to that of Andres who Cookie has never called the police on.

Cookie sends Maya on errands. There are no free rides in this house, Cookie tells her. Carol comes in laughing. They talk about Lucious mortgaging the house. Carol warns her this is a bad idea. Cookie feels guilty but Carol tells her not to.

Hakeem pays a visit to Blake. They talk. Blake wants to squash this but he isn’t apologizing. Hakeem wants an apology for Blake moving in on his girl. Blake tells him she didn’t act like his girl when they cooked dinner together. Hakeem gets mad and pulls a gun. He tells him he needs to fix this as he backs out of Blake’s place.

Gisele meets with a PI who tells her all about Jeff’s mother. She hands Gisele a file.

Lucious, Thirsty and Andre all meet to talk about getting Jeff’s files on his computer. They need someone on the inside. The next day, Thirsty meets with Becky at a cafe to talk. Thirsty talks to her about her loyalties. He asks her to get files off of Jeff’s computer. She cannot believe he is asking her this. He tells her she needs to choose a side.

Becky arrives at Empire. She goes into Jeff’s office who shows up a second later. She tells him she is mad that Lyons’ music is vaulted. She had credits on his albums. She drops her purse and pretends to pick it up while she steals his files. He talks from across the room and understands why she is upset. That is why he is doubling her salary.

At the Lyons, they get the files and learn Jeff is selling Empire users information to law enforcement. His app turns every phone into a listening device. They need to expose him. But they cannot do it. They need a news source to do it. Lucious visits with Kai and Jamal. Kai wants in.

Jeff arrives to visit his mother when he comes into the room to find Gisele. She tells him she knows all about how Jeff’s mother used to hang with Lucious around the time he was born. She wants to talk about her future.

Candace shows up at Cookie and Luscious’ house. She tells Lucious all about Cookie’s property as payback.

Hakeem watches Tiana pack as she scolds him for going to Blake’s. She is out of there. Blake was right about him.

Lucious asks Cookie if she loves him. If she did, she would have told him. She tells him she was scared and this was about trust. They argue. Tiana and Hakeem come out of the other room arguing. Bella comes down the hall and has Hakeem’s gun in her hand. They all see and plead with her.