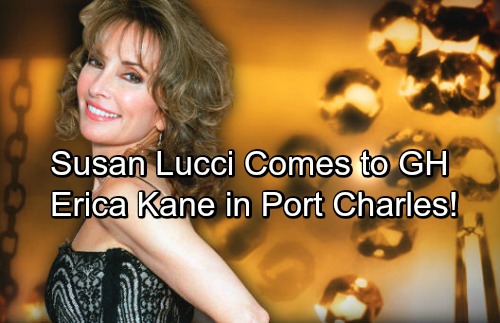 General Hospital (GH) spoilers tease that the show could be adding a soap superstar soon. Not too long ago, Maxie (Kirsten Storms) sparred with Erica Kane’s (Susan Lucci) assistant on the phone. Erica’s name was mentioned several times during that episode, so GH fans quickly started buzzing. People naturally wondered if the popular All My Children character would make her way to Port Charles.

ABC exec Nathan Varni would certainly like to make it happen. In an interview with ABC Soaps in Depth, Varni opened up about the idea of Erica causing chaos in PC. “That would be fantastic,” Varni said. “She was one of the first ones that popped into my mind. What does Susan Lucci look like in Port Charles? The potential is endless.”

Varni went on to talk about what might be in store for Erica if she shows up in town. There would be plenty of possibilities to explore. “I can see her crossing with a number of our residents, so it would be fun,” Varni said. “I’d love to see it!”

General Hospital already set up that battle we mentioned with Crimson. Maxie really got on Erica’s bad side, so the AMC legend may be coming for her. Of course, Nina (Michelle Stafford) would be caught in the conflict. She could face off with Erica and give us some exciting scenes.

Erica might even try to purchase Crimson and leave Nina scrambling. If not, she could at least attempt to ruin their brand. However, Nina and Erica might realize they’re better together in the end. It’d be great to watch them team up and become a dynamic duo in the fashion world.

Erica could branch out and clash with other characters later. GH has a big cast, so there’d be tons of options. The show could easily cook up an awesome story for Lucci in this fierce role. General Hospital spoilers say some bombshells are coming in the months ahead, so let’s hope Erica’s arrival is one of them.

Would you like to see Erica Kane shake things up? Should GH get Susan Lucci to reprise her famous role? We’ll give you updates as other news comes in. Stick with the ABC soap and don’t forget to check CDL often for the latest General Hospital spoilers, updates and news.