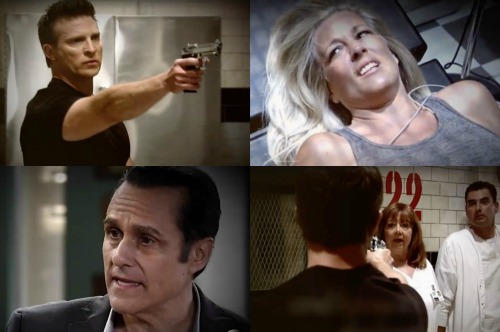 General Hospital (GH) spoilers tease that Carly (Laura Wright) will be absolutely terrified. Her drug dosages are far too high, so Carly’s struggling to make sense of much at the moment. However, she’ll soon realize that things are growing dire. Mary Pat (Patricia Bethune) warned that Dr. Lasaris (Casey Biggs) had some unorthodox treatment in store, which sounds awfully disturbing.

After she strapped to a table, Carly will fear the worst. An injection will be prepared for her, so this can’t be good! Meanwhile, Jason (Steve Burton) will get fed up with Carly’s circumstances. He knows Carly’s in trouble, so he can’t just let her be tormented. Jason was banned from the premises, but that won’t stop him from sneaking in and waving a fun around.

Mary Pat and another staff member will be stunned by Jason’s armed arrival. He’ll point his weapon at them and insist that Carly’s misery is over. There’s a good chance Jason will burst in and stop Dr. Lasaris from injecting his new patient. Carly may be saved for now, but the GH drama won’t be over yet.

Jason’s move could obviously bring serious consequences. Between breaking in a mental institution and creating a hostage situation, Jason could be looking at major charges. That’s especially true with Margaux (Elizabeth Hendrickson) in town. Ever since she came on the scene, she’s proven to be harsh and swift to act. Jason could end up in prison if he’s not careful.

Of course, Jason won’t care about any of that. He won’t even be thinking about what it’d do to his family if they lost him again. Sam (Kelly Monaco), Danny (T.K. Weaver) and Jake (Hudson West) would certainly hate to see Jason locked up. Nevertheless, Jason can’t stand by and let his bestie suffer. When it comes to Carly, Jason will always do whatever it takes.

Before the fallout can happen, Jason has to wrap up all this Ferncliff chaos. It appears Jason will call in reinforcements soon enough. After showing up just in time, General Hospital spoilers say Jason will contact Sam on August 1. The next day, Sam and Curtis (Donnell Turner) will visit Ferncliff to pitch in.

Will Curtis and Sam help resolve the Carly crisis? If they threaten to expose Dr. Lasaris’ presumably illegal treatment plan, perhaps they can work out some type of deal for Jason. We’ll give you updates as other General Hospital news comes in. Stay tuned to ABC’s GH and don’t forget to check CDL often for the latest General Hospital spoilers, updates and news.