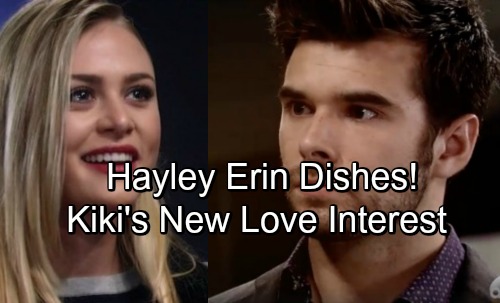 General Hospital (GH) spoilers tease that Kiki (Hayley Erin) has some difficult moments in her future. She already endured Dr. Bensch’s (James DePaiva) horrible harassment. Now she’s stuck preparing for a legal battle, so Kiki’s had it rough lately. However, the worst drama’s still to come!

GH watchers know Kiki and Griffin (Matt Cohen) are keeping their one-night stand a secret, which means it’s destined to blow up. In a recent Twitter chat, Hayley Erin tackled some fan questions and offered some hints about what’s ahead. She made it clear that she welcomes the Kiki chaos!

One viewer pointed out that Ava (Maura West) sort of deserves this. After everything that happened between Ava and Morgan (Bryan Craig), will Mama Jerome consider the score even? We’d say not a chance! Erin doesn’t seem to think that’s an option either, but she’s not complaining. “I hope not,” Erin said. “I want major fallout. Is that bad?”

Someone else wanted to know what that fallout would entail. Erin couldn’t give away too much away, but she teased that “all hell will break loose.” She later added that “poor Kiki can’t catch a break.” Erin’s looking forward to the big reveal and the mayhem that will follow. It seems likely that Kiki’s court case will bring the hookup out in the open. That should give us some exciting scenes!

Soapy fun is fantastic, but this is also a great tie-in with the “Me Too” movement. Erin is certainly aware of this story’s magnitude. “GH Too” is raising awareness and could perhaps give someone the push he or she needs to take action. Has Erin been thinking about that throughout this hot plot? “Of course, if we can help just one person find their voice that’s enough for me,” Erin insisted.

Finally, Erin had to address her lack of a love interest. Dillon (Robert Palmer Watkins) is no longer in the picture, so who should Kiki be with next? A General Hospital fan asked Erin to pick from the options of Chase (Josh Swickard), Michael (Chad Duell) and Griffin. Erin suggested she’d choose Chase for Kiki, but there’s a bit of a problem. They haven’t even shared a scene yet!

Erin replied, “If Kiki and Chase could meet…” Many GH viewers are rooting for “Chiki,” so let’s hope it happens after Nelle’s (Chloe Lanier) story winds down and Kiki’s case wraps up. General Hospital spoilers say some shockers are brewing, so we’ll give you updates as other news comes in. Stick with the ABC soap and don’t forget to check CDL often for the latest General Hospital spoilers, updates and news.