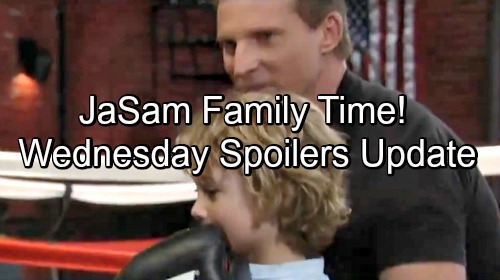 General Hospital (GH) spoilers for Wednesday, July 25, tease that Kiki (Haley Erin) will get quite a shock. She’ll be summoned for a meeting that’s been set up by Alexis (Nancy Lee Grahn). GH fans know Kiki’s been unbelievably stressed about the court case. She’s losing her mind over all this, so Alexis sought help from Ava (Maura West). They’ll call in reinforcements soon enough.

Olivia (Lisa LoCicero), Kim (Tamara Braun) and Jordan (Vinessa Antoine) will be present for what seems like an intervention. The ladies may come together to show their support and convince Kiki to stop worrying. Dr. Bensch (James DePaiva) isn’t worth all her concerns.

Of course, Kiki’s secret is undoubtedly adding to her stress level right now. She’s desperate to keep her one-night stand with Griffin (Matt Cohen) under wraps. Unfortunately, hiding that hookup from Alexis could spark disaster. General Hospital spoilers suggest that things will ultimately take a wrong turn in court.

Meanwhile, Sam (Kelly Monaco) and Jason (Steve Burton) will hit the boxing gym with Danny (T.K. Weaver). They’ll coach their son on proper punching techniques as he strikes a bag. Danny will appreciate this time with his parents, but Jason and Sam will squeeze in some moments alone as well.

Across town, Nelle (Chloe Lanier) will make her pitch to Chase (Josh Swickard). She’ll want him to permanently remove Michael from the picture. Nelle just won’t see any other way out of this mess. She’ll hope Chase can kill Michael and make it look like an accident, which is just what Chase wants to hear.

Once Nelle delivers her request, she’ll plant a kiss on Chase and take off. General Hospital spoilers say Chase will send Michael a text about their trap. Michael will realize that it worked like a charm, but the final phase will bring the real danger. A stunning car crash is coming up later this week, so GH viewers won’t want to miss it.

Until then, Nelle will continue her charade. She’ll keep up the friend ruse when she gives Josslyn (Eden McCoy) guidance about Oscar (Garren Stitt). At some point, Joss will turn to Sonny (Maurice Benard), too. He’ll be busy fretting over Michael’s peril, but he’ll still find a few minutes to make a deal. Josslyn will happily shake on their agreement, so they should get a little hint of joy on Wednesday.

Some great scenes are coming up on GH. We’ll give you updates as other details emerge. Stick with the ABC soap and don’t forget to check CDL often for the latest General Hospital spoilers, updates and news.